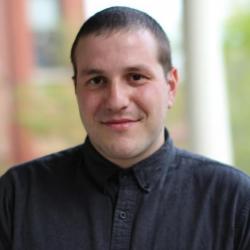 Boaz manages the web platform consulting company Bocoup where he works to make the web more predictable and inclusive through technology standards development and engineering. At the Berkman Klein Center, Boaz is active in the ethics working group, where he is working on a critique of the values embedded in “open source” production.

Between 2016 and 2017, Boaz ran a contemporary art gallery with a focus on tech criticism. During this time he curated works from artists exploring the role and impact of technology on society.

From 2011 until 2017, Boaz was an invited expert to the W3C where he started the Games community group, outlining a roadmap for “open web games”, and contributed to the web-platform-tests initiative. During this same period, Boaz also contributed to the jQuery, Backbone, and Grunt projects and helped start the jQuery Foundation where he served as a board member until its relaunch as the JS Foundation.

Prior to Bocoup, Boaz worked as a front-end developer for a dot-com where he built early client side web applications. Boaz studied Liberal Arts at Bennington College from 2003 to 2005. His software production education came from working in open source communities, writing documentation, and working as a web developer.