Many youth in the United States have fully integrated the Internet into their daily lives. For them, the Internet is a positive and  powerful space for socializing, learning, and engaging in public  life. Along with the positive aspects of Internet use come risks to  safety, including the dangers of sexual solicitation, online  harassment, and bullying, and exposure to problematic and illegal  content. Last January, The Multi-State Working Group on Social Networking, comprising 50 state Attorneys General, called upon  MySpace to assemble an Internet Safety Technical Task Force to determine the extent to which today's technologies could help to  address these online safety risks, with a primary focus on social  network sites in the United States. Led by the Berkman Center, the  Task Force completed its year-long inquiry in December, and recently released its Final Report to the Attorneys General,  sparking a lively public debate about what kinds of risks youth are  really facing online, and what can and should be done to make the  Internet safer for them. On Febuary 3, Task Force chair John  Palfrey, along with project co-directors danah boyd and Dena Sacco and Technical Advisory Board Chair Laura DeBonis, will present the report's findings, discuss its major recommendations and answer any questions.

John Palfrey is Henry N. Ess Professor of Law and Vice Dean for Library and Information Resources at Harvard Law School. He is the co-author of "Born Digital: Understanding the First Generation of Digital Natives" (Basic Books, 2008) and "Access Denied: The Practice and Politics of Internet Filtering" (MIT Press, 2008). His research and teaching is focused on Internet law, intellectual property, and international law. He practiced intellectual property and corporate law at the law firm of Ropes & Gray. He is a faculty co-director of the Berkman Center for Internet & Society at Harvard University. Outside of Harvard Law School, he is a Venture Executive at Highland Capital Partners and serves on the board of several technology companies and non-profits. John served as a special assistant at the US EPA during the Clinton Administration. He is a graduate of Harvard College, the University of Cambridge, and Harvard Law School.

danah boyd is a graduate of the School of Information at the University of California-Berkeley and a fellow at the Berkman Center for Internet & Society at Harvard University. Her dissertation focuses on how American youth engage in networked publics like MySpace, YouTube, Facebook, Xanga, etc. In particular, she is interested in how teens formulate a presentation of self and negotiate socialization in mediated contexts amidst invisible audiences. This work is funded by the MacArthur Foundation as part of a broader grant on digital youth and informal learning.

Laura DeBonis, Technology Advisory Board Chair. Laura recently left Google where she worked for 6 years on a variety of products and projects. Most recently, she was the Director for Library Partnerships for Google Book Search; she also worked on the launch teams for AdSense Online and Froogle as well as managed global operations in the early days of Book Search. Prior to Google, Laura worked at Organic Online, consulting for a variety of companies on their web strategies and design. Before attending graduate school, Laura spent a number of years working in documentary film, video and interactive multimedia, creating content for PBS, cable channels, and museums. Laura is a graduate of Harvard College and has an MBA from Harvard Business School.

The Internet Safety Technical Task Force (ISTTF) is a group of Internet businesses, non-profit organizations, academics, and technology companies that have joined together to… 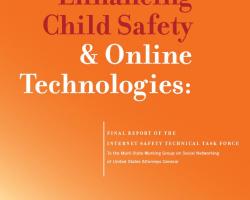