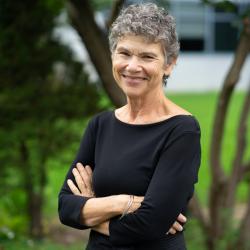 Francine Berman is the Director of Public Interest Technology and Stuart Rice Research Professor in the Manning College of Information and Computer Sciences at the University of Massachusetts, Amherst. She is former Director of the San Diego Supercomputer Center, former Vice President for Research at Rensselaer Polytechnic Institute, and co-founder of the international Research Data Alliance.

Fran is the inaugural recipient of the ACM/IEEE-CS Ken Kennedy Award for "influential leadership in the design, development, and deployment of national-scale cyberinfrastructure" (2009), recipient of the 2020 Paul Evan Peters award (given by Educause and the Association of Research Libraries), an elected member of the American Academy of Arts and Sciences, and a Fellow of the National Academy of Public Administration. She was nominated by President Obama and confirmed by the U.S. Senate to become a member of the National Council on the Humanities in 2015.

Fran’s current research interests focus on Public Interest Technology, the social and environmental impacts of the Internet of Things, and data policy, cyberinfrastructure, stewardship and preservation. She currently serves as a Trustee of the Alfred P. Sloan Foundation, and previously served as Chair of the Anita Borg Institute Board of Trustees, promoting the recruitment, advancement, and retention of women in technology.

BKC Faculty Associate Fran Berman joined Alan Chartock of WAMC Northeast Public Radio, Jim Ketterer, and Sarah Rogerson in a roundtable discussion of issues in the news and beyond.

Fixing the Internet will require a cultural shift

A Q&A with Francine Berman

Francine Berman shares her personal story in tech, and how the field can change

The good, bad, and scary of the Internet of Things

BKC faculty associate Francine Berman on the question that keeps her up at night: Is the Internet of Things a future utopia, or is it a future dystopia?

The U.S. Should Do More To Protect Our Data Privacy

Who makes sure that companies collecting your personal data operate in ways that benefit, rather than exploit, you?