The Internet has been billed as the great equalizer, breaking down barriers and increasing access to information and ideas. At the same time, it has allowed for the proliferation of abuse online – whether in the form of hate, harassment or offensive content. The freedom to express oneself is an important principle, but should it persist unfettered? How and where should we draw the line, and who – or what – should play a role in moderating online debate? Monika Bickert, Facebook’s Head of Global Policy Management, and Jonathan Zittrain, Faculty Director of the Berkman Klein Center for Internet & Society and Harvard professor, discuss online abuse and the role that technology can play in addressing it.

Monika Bickert is Facebook’s Head of Global Policy Management. Her global team manages the policies for what types of content can be shared on Facebook and how advertisers and developers can interact with the site. She also manages the company’s response to terrorist content online. Monika originally joined Facebook in 2012 as lead security counsel, advising the company on matters including child safety and data security.

Prior to joining Facebook, Monika served as Resident Legal Advisor at the U.S. Embassy in Bangkok, Thailand, where she specialized in Southeast Asian rule of law development, including Southeast Asian governments’ response to terrorist insurgencies, child exploitation, and human trafficking. She also served as an Assistant United States Attorney for 11 years in Washington, DC, and Chicago, prosecuting federal crimes ranging from public corruption to gang-related violence. During her time in Chicago, Monika was the Northern District of Illinois’ coordinator for the prosecution of crimes against children, and she also received the Investigation of the Year award from Drug Enforcement Administration for U.S. v. James Austin, et al., a prosecution of 50 gang members and associates for coordinated narcotics trafficking that caused over a dozen deaths.

Monika received a B.A. from Rice University and a J.D. from Harvard Law School.

Jonathan Zittrain is the George Bemis Professor of International Law at Harvard Law School and the Harvard Kennedy School of Government, Professor of Computer Science at the Harvard School of Engineering and Applied Sciences, Vice Dean for Library and Information Resources at the Harvard Law School Library, and co-founder of the Berkman Klein Center for Internet & Society.  His research interests include battles for control of digital property and content, cryptography, electronic privacy, the roles of intermediaries within Internet architecture, human computing, and the useful and unobtrusive deployment of technology in education.

He performed the first large-scale tests of Internet filtering in China and Saudi Arabia, and as part of the OpenNet Initiative co-edited a series of studies of Internet filtering by national governments: Access Denied: The Practice and Policy of Global Internet Filtering; Access Controlled: The Shaping of Power, Rights, and Rule in Cyberspace; and Access Contested: Security, Identity, and Resistance in Asian Cyberspace.

He is a member of the Board of Directors of the Electronic Frontier Foundation and the Board of Advisors for Scientific American.  He has served as a Trustee of the Internet Society and as a Forum Fellow of the World Economic Forum, which named him a Young Global Leader. He was a Distinguished Scholar-in-Residence at the Federal Communications Commission, and previously chaired the FCC’s Open Internet Advisory Committee. His book The Future of the Internet -- And How to Stop It predicted the end of general purpose client computing and the corresponding rise of new gatekeepers.  That and other works may be found at <http://www.jz.org>.

Facebook’s Community Standards: How and Where We Draw the Line by Monika Bickert Hard Questions: How We Counter Terrorism
Past Event
Sep 19, 2017
Time
12:00 PM - 1:15 PM 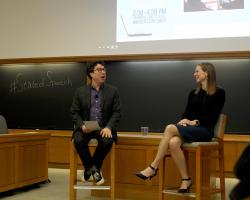 The State of Online Speech and Governance

The Berkman Klein Center for Internet & Society is in the third year of a research, policy analysis, and network building effort devoted to the study of harmful speech, in close…

As autonomous systems play an increasing role in selecting the content we see online, questions arise about AI's influence on human judgment, opinions, and perceptions.