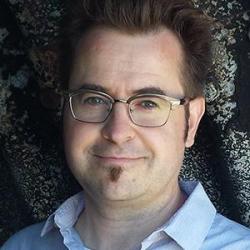 Dr. Russell Newman is an Associate Professor in Digital Media and Culture at Emerson College’s Marlboro Institute for Liberal Arts and Interdisciplinary Studies. He is also President of the Emerson College chapter of the American Association of University Professors and Co-Coordinator of the Union for Democratic Communications.

His work explores the intersections of the political economies of media and surveillance, neoliberalism, the epistemological foundations of media policymaking, and activism surrounding communications policy. He is the author of “The Paradoxes of Network Neutralities"" (MIT Press, 2019) which explores the deep connections of open access and network neutrality debates with neoliberalism and draws lessons for activism in future such debates. While serving as Faculty Associate, Dr. Newman will be examining the foundations of modern-day logistical and supply chain processes of which media are increasingly a significant part. Those concerned with communications policy must think beyond its classically liberal aspects as production and dissemination of content. He will explore the political economy of the logistics of the circulation of our ‘data exhaust’ and their epistemic underpinnings, tracing paths amongst advertisers, marketers, and financial and industrial concerns.

Dr. Newman earned his Ph.D. at the Annenberg School for Communication and Journalism at the University of Southern California. Previously to joining the academy, he served as Research and Campaign Director for the national nonprofit advocacy group Free Press. With Robert McChesney and Ben Scott, he co-edited The Future of Media: Resistance and Reform in the 21st Century (Seven Stories Press, 2005), named as one of Working Assets' Recommended Reads for July 2005. He worked as a Telecommunications Fellow for Senator Richard Durbin of Illinois in 2007. He spent several years as a freelance multimedia designer and as a production designer for a number of independent films; he was also active in noncommercial radio in Boston for nearly a decade.

The Paradoxes of Network Neutralities