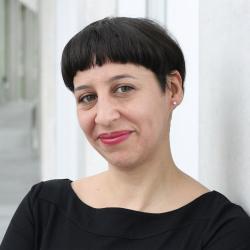 Maroussia Lévesque is a researcher and attorney working on the governance of artificial intelligence. She holds a computation arts degree from Concordia University and law degrees from McGill and Harvard University. She is a member of the Quebec Bar. Prior to graduate studies at Harvard Law School, she focused on artificial intelligence (AI) and foreign policy at the Canadian government. Maroussia served on an inquiry commission pertaining to electronic surveillance in Quebec, where she also clerked for the Chief Justice at the Court of Appeal.

Her current research focuses on AI governance. She is exploring polycentric models to arbitrate among public, industry, and civil society actors. This thread continues previous work pertaining to the role of private actors in AI governance, with an emphasis on the United Nations Guiding Principles for Business and Human Rights. More broadly, Maroussia is interested in the translation of analog-era rights into technology-mediated contexts, particularly the (in)adequacy of binary conceptions of equality and non-discrimination law in the context of probabilistic assessments. NeurIPS featured her work in the IEEE working group on algorithmic bias. She published on IP considerations in stem cell research, created an interactive installation about extraordinary rendition in the war on terror, and co-wrote a book chapter on the role of mobile platforms in the public sphere.