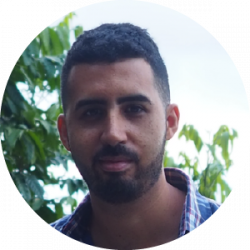 Leonard Cortana is a P.hD Candidate at the Cinema Studies Department at NYU Tisch School of the Arts and a Research Fellow at the NYU Africa House.

His research focuses on the transnational circulation of narratives about racial justice and activist movements between Brazil, South Africa, France and the US with a special emphasis on the memorialization of political assassinations, the spread of the legacy of assassinated anti-racist activists and the online protection of frontline activists. He also investigates the expansion of digital film festivals, the development of AI-based deepfake technology, the distribution of visual media advocating for a safe general artificial intelligence. He has written several articles for the Francophone Journal Jeune Afrique.

Prior to NYU, he conducted several artistic and educational projects with non-profits and UN agencies that engage with youths in Chile, Dominican Republic, Brazil, Australia, France and Bulgaria. He became a Trainer for European Commission Youth Program projects and designed methodologies in theatre and storytelling for social inclusion for youth workers. In 2012, Cortana founded the collective Inform’ART France, which brought together youth workers and artists. Among their projects, the collective drew upon the Human Library methodology to create a network of practitioners all over France and took part in the youth delegation of the Festival Against Racism in Brussels and Montreal.

Cortana is also a documentary filmmaker. His last documentary Marielle's Legacy Will not Die follows activist movements spreading the intersectional legacy of Afro-Brazilian activist and politician Marielle Franco in Rio de Janeiro, Brazil. As his film circulates transnationally, he creates networks of advocacy with other anti-racist activists.

Cortana earned the EU Commission NOHA Masters in Humanitarian Assistance and holds a double-degree in Comparative Politics and Hispanic Literatures and Cultures at Sciences-Po Aix en Provence. He also received a BA in Cinema and Aesthetics from Panthéon Sorbonne University. He was a dissertation Fellow at the UCSB Black Studies Department, NYU Paris and Madrid.

Disinformation creep: ADOS and the strategic weaponization of breaking news

‘Marielle’s legacy will not die’

Living on in death

Her name was Marielle Franco…

Two years after the assassination of Marielle Franco, BKC fellow and filmmaker Leonard Cortana reflects on the subject of his documentary

“Marielle’s Legacy Will Not Die”

An interview with the documentary filmmaker and BKC fellow Leonard Cortana