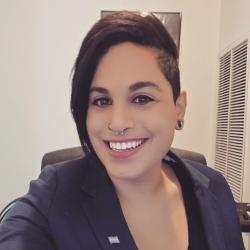 Alejandra Caraballo is a Clinical Instructor at Harvard Law School's Cyberlaw Clinic. Prior to joining the clinic, Alejandra was a staff attorney at the Transgender Legal Defense and Education Fund and a Staff Attorney at the LGBTQ Law Project at New York Legal Assistance Group. Alejandra's professional focus has been on advancing the civil rights of LGBTQ people in a variety of civil legal contexts such as healthcare access, immigration, and family law. Alejandra received her J.D. from Brooklyn Law School where she concentrated in IP and Media Law. She received her B.A. in Government and World Affairs with a minor in Chemistry at the University of Tampa. Alejandra previously served as the Secretary of the LGBTQ Rights Committee of the New York City Bar Association and was appointed as the first openly trans community board member in Brooklyn. Alejandra's areas of interests include the intersection of technology and disability rights, sex worker advocacy, and the implications of quantum computing on encryption. In her spare time, she can be found playing guitar, building computers, creating electronic music, and brewing beer.

"Under that reasoning, said Alejandra Caraballo of the Harvard Law School Cyberlaw Clinic, the key question for Twitter is whether tweets from fake corporate…

Cyberlaw clinic’s Alejandra Caraballo discusses how children’s hospitals are taking down websites as a result of harassment and threats.

Payment Data Could Become Evidence of Abortion, Now Illegal in Some States

'Trust isn't built by just one policy.' Abortion care rights in the workplace are complicated

Alejandra Caraballo provides an overview on how surveillance technology can impact prosecutions in the Post-Roe era.

Tech Companies Are Not Ready for a Post-Roe Era

Alejandra Caraballo writes about how tech companies have to grapple with limiting abortion access in the United States.… 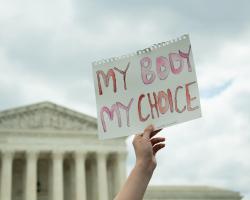