On October 14, the FCC posted for public comment the Berkman Center’s draft study Next Generation Connectivity: A review of broadband Internet transitions and policy from around the world. Hundreds of pages of comments were submitted to the FCC, and some were very helpful in identifying useful additional analysis. In mid-January, the Berkman Center will submit the final draft of the report to the FCC.

Today we are making available a memorandum that outlines the most important updates we plan to include in the final report:
Memorandum Describing Intended Updates to the Final Report (PDF).
The updates reinforce our draft study’s findings.

These updates include, most importantly, a literature review of 57 articles on open access and its effects on penetration and investment. Fifteen of the papers we reviewed analyze the effects of unbundling on penetration. Of these fifteen papers, six papers find positive effects of unbundling on penetration; three find negative effects; and six have indeterminate findings (they find either no effect or both positive and negative effects). Twenty-three of the papers related to unbundling and investment. Of these twenty-three, two show positive effects of unbundling on investment by incumbents or entrants; one shows positive and negative effects; two report no findings; one reports negative findings. The remaining seventeen papers on investment are either conceptual or modeling exercises, rather than empirical studies, or have serious methodological flaws; the papers we categorize in this group are divided equally, eight and eight, between finding negative and positive effects on investment, and one that reviews the literature to 2006 and concludes: “Almost ten years have passed since the Telecommunications Act transformed telecommunications regulation in the United States and economists still do not have a thorough understanding (theoretically or empirically) of how local loop unbundling affects investment” (see update memo (PDF), page 5). The remaining nineteen of the 57 papers we reviewed were qualitative.

We note that twenty of the thirty-eight quantitative or theoretical papers we reviewed are self-published. At least sixteen of the thirty-eight are directly sponsored by a corporate sponsor with direct interest in the outcomes of the research. The papers on the effects of open access on investment exhibit this characteristic at a particularly high rate. Thirteen of twenty-three are sponsored by a party with direct commercial interest in the outcome. While these papers obviously need to be read on their merits, the sensitivity of econometrics to the model selected and the technique, coupled with their opacity to policy makers, counsel particular caution.

Of the nineteen qualitative papers or book chapters we reviewed, none were self-published, and three had industry sponsorship. Of these nineteen papers, ten identified open access policies as having positive effects on broadband deployment and prices. Two papers (both industry sponsored) identified negative or no effects where positive effects would be anticipated. One found both negative and positive findings. Six found no effect, or focused on the political economy rather than on the outcomes.

We also briefly outline in the update memo results of additional data analysis we performed on both speed and price. The new research confirms our initial findings that US prices are low for the slowest speeds, at 768kbps, but rise relative to other countries so that by the time we reach contemporary speeds of 1.5Mbps or 2Mbps, they are higher, and for the highest speeds US prices are very high by global standards. We also added Akamai data to our original speed analysis that used Speedtest.net data and found that, even though Akamai tested in the network, rather than at the edges, using a different technique, both approaches gave highly correlated findings, and both place the US in 11th place in the OECD in terms of actual speeds measured.

The combined effect of our literature review and new data analysis is that our original conclusions are substantially strengthened.

The Berkman Center conducted an independent expert review of existing literature and studies about broadband deployment and usage throughout the world, in order to help inform the…

Since submitting its Next Generation Connectivity report to the FCC's National Broadband Plan committee, the Berkman Center has continued its research on broadband policy. 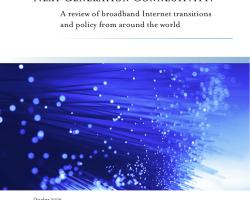