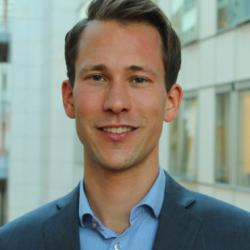 Nikolas Guggenberger is a postdoctoral associate at Yale's Information Society Project and the RWTÜV foundation assistant professor at the University of Münster School of Law.

His research focusses on the intersection of law and technology, specifically platform regulation, the automation of law, and the future of private law. Nikolas is especially interested in the potential of blockchain technology, artificial intelligence, and algorithmic governance.

Prior to his present appointments, Nikolas served as policy advisor to Jakob von Weizsäcker at the European Parliament in Brussels working in the field of banking and financial markets regulation as well as monetary and economic policy (2014-2016). He contributed to the European Parliament’s first resolution on virtual currencies and the negotiations on a banking structural reform regulation. From 2010-2012, Nikolas clerked at the district court of Freiburg, Germany. In parallel to his doctoral research, he worked as a teaching assistant and research associate to Prof. Dr. Boris P. Paal, M.Jur. (Oxford) at the Institute for Media and Information Law at the University of Freiburg School of Law.

Nikolas holds law degrees from Stanford Law School (LL.M., 2014) and the University of Freiburg, School of Law (JD-equivalent, 2010). Additionally, he obtained a doctorate (Ph.D.) in law from the University of Freiburg, School of Law (Dr. iur., 2014) with a thesis on “Network Neutrality: General Principle and Antitrust Abuse Control” (published: “Netzneutralität: Leitbild und Missbrauchsaufsicht”). Nikolas is admitted to the State Bar of California (presently inactive).

Can an EU member state’s court can order an internet company to take down or de-list information online?