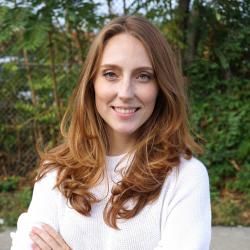 Moira Weigel is a historian and theorist of media technologies and a founding editor of Logic magazine. Originally trained in modern languages, including German and Mandarin Chinese, she now studies digital media in a global context, focusing on vulnerabilities and opportunities that arise from the translingual and transnational movements of texts, images, information, and human actors. She also has a strong secondary interest in feminism, gender, and sexuality.

Moira’s first book, Labor of Love: the Invention of Dating (2016), countered widespread claims that the rise of mobile phones and social media were bringing about the “death of romance,” showing that modern courtship practices have consistently coevolved with consumer capitalism and other forms of gendered work. Labor of Love has been translated into five languages and appeared in dozens of outlets including The New Yorker, The New York Times, The Economist, The Washington Post, The Atlantic, The Guardian, Wall Street Journal, NPR, CNN, and HBO. In the process of talking about it in public, Moira developed a keen interest in online misogyny, racism, and disinformation, that led her to her current book project. Tentatively entitled Politically Correct: The History of an Accusation, it tracks the rise of “PC” as an early meme and the role that debates about it played in the formation of a surprising range of digitally mediated counterpublics worldwide.

Alongside her academic research, Moira is a cofounder of Logic magazine and Logic Books and co-editor of Voices from the Valley (2020), a collection of interviews with anonymous workers from across the Bay Area tech industry. She received her PhD from the joint program in Comparative Literature and Film and Media Studies at Yale University and spent 2017-2020 at the Harvard Society of Fellows. She is currently a Sociotechnical Security Fellow at the Data and Society Institute. In 2021, she will join Northeastern University as an Assistant Professor in Communication Studies.

Silicon Valley Workers Have Had Enough