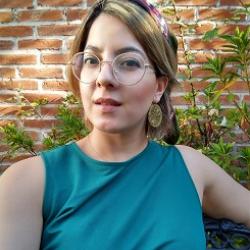 Isadora’s work examines how Western governments, often categorized as “advanced democracies”, engage in undemocratic mass surveillance behaviors by deputizing a wide range of companies into monitoring and making data accessible. Using a political economy perspective, her work builds on the evidence provided by Edward Snowden and other whistleblowers to analyze United States’ tech policy on surveillance. Using comparative, behavioral, and political economy frameworks, she has developed original quantitative measures on the differences between attitudes towards state surveillance and surveillance capitalism. She has identified a distinct attitude towards deputized complex, a term she coined to describe the process by which governments require and convince private companies to surveil and make accessible data on citizens’ consumer behavior. This creates a “surveillance complex” that updates the industrial-military complex beyond the purchase of hardware.

Her analysis of American respondents strongly suggests attitudes towards surveillance are partially shaped by intergroup relations. The desire to surveil disliked groups tends to override reservations that liked groups are also affected in mass surveillance programs. This helps us understand how tacit and explicit public safety narratives blunt or stymie increased information of how these programs work. As an affiliate at Berkman Klein, she is interested in bringing in the study of public opinion and framing effect experiment analysis to a wide range of technology policy issues. As a quantitative-leaning scholar, she is also interested in supporting researchers’ data security practices to ensure research subjects’ safety. She is an R user and enjoys assisting coding workshops, where she will try to convince anyone who will listen to use magrittr's compound pipe.

Identifying that deputized surveillance programs create a democratic accountability gap, her research is focused on developing measures that adequately reflect citizen attitudes towards the scope, depth and variation in surveillance policies currently in use. Her research compares American to European attitudes and politics surrounding divergent regulatory frameworks, which she contextualizes through an analysis of their differing legal traditions and constraints. She holds an MA in Social Sciences from the University of Chicago, where she researched the DMCA, Google’s surveillance of digital piracy, and its effects on academic knowledge building. Isadora in a member of the Centre for the Study of Democratic Citizenship, was a FRQSC scholar and has been awarded the 2018 NPSA/Pi Sigma Alpha Best Paper Award for The European Voter Privacy-Security Choice during 2014 EU Elections.