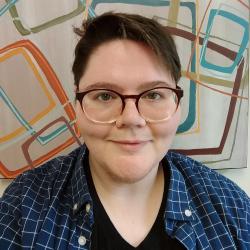 Griffin Boyce was a fellow working on a variety of internet freedom software projects before becoming the systems administrator here at BKC. His research interests are at the nexus of digital security, privacy, and censorship circumvention.

Lately he's been creating tools to help readers determine the veracity of content they see online and assist people in removing their private information from data brokers. As a fellow at the center, Griffin conducted an in-depth network-based study of digital censorship in Post-Soviet states.

One of his best-known projects is Cupcake, which allows a user to create new bridge-like entrypoints to the Tor network, in order to increase unfettered internet access in the most censored areas of the world.

He is also a Fellow with X-Lab at Penn State, working at the intersection of usability and security in software. Previously, he was a Senior Research Fellow with the Information Controls Fellowship Program and was a Senior Security Researcher for the Open Internet Tools Project. Other projects he's contributed to include the Tor Project, Commotion Wireless, Tails, Gender Outreach.

When not making software, he participates in many protests, dabbles in urban gardening, paints a bit, plays video games, and travels the world. He likes to say he is "thoroughly enmeshed" with the internet freedom community.

In 2019, Griffin left the center to join an operating system project at a small search engine company in California.

You’ve probably never heard of many of the data firms registered under a new law, but they’ve heard a lot about you.