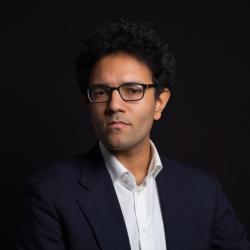 Dipayan Ghosh, Ph.D. is the co-director of the Digital Platforms & Democracy Project at the Shorenstein Center on Media, Politics and Public Policy at the Harvard Kennedy School and faculty at Harvard Law School. His research and writing on digital privacy, artificial intelligence, disinformation, and internet economics has been cited and published widely, including in The New York Times, The Washington Post, The Wall Street Journal, Harvard Business Review, CNN, MSNBC, CNBC, NPR and BBC.

A computer scientist by training, Ghosh previously worked at Facebook, where he led strategic efforts to address privacy and security issues. Prior, he was a technology and economic policy advisor at the White House during the Obama administration. Named to the Forbes 30 Under 30, he received a Ph.D. in electrical engineering & computer science from Cornell University, an MBA from the Massachusetts Institute of Technology, and completed post-doctoral work at the University of California, Berkeley.

The site’s business model is the problem, not just which apps it owns, argue Dipayan Ghosh and Nick Couldry

Should Big Tech Be Setting the Terms of Political Speech?

Dipayan Ghosh explains why social media platforms need to be more transparent about their policies on politicians spreading misinformation.

Will Big Tech save us or enslave us in the Covid-19 meltdown?