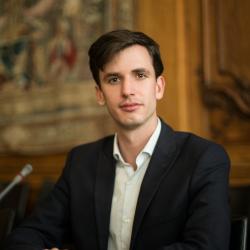 Andras Molnar is an Affiliate at Harvard University’s Berkman Klein Center for Internet and Society and serves as a Policy Analyst at an International Organisation.

At Harvard, Andras gives academic lectures and develops research that can foster the digital transformation and make it work for the economy and society.

Andras publishes extensively and his contributions in the area of the digital economy were recognised internationally, including at G7 and G20 leaders’ summits. He authored and co-authored several books and articles, including a Digital Economy Outlook, numerous Digital Economy Papers, and Digital Policy Briefs. He also played a leading role in launching the Global Forum events on Digital Security for Prosperity which has become one of the most influential multilateral settings on cybersecurity.

Previously, Andras worked at the United States Congress, the United Nations and the European Parliament.

Andras holds a BA in History, Politics and International Relations from Durham University and an MSc in Comparative Politics from the London School of Economics and Political Science (LSE).

*Disclaimer: Andras conducts his role at Harvard in his personal capacity, and his opinions expressed should not be considered or reported as representing the official views of the International Organisation in which he works.