“How do social and ethical norms emerge vis-à-vis new technologies and their usage? What are the forces at play? How do people, how do communities of practice start to agree on what’s right or wrong, appropriate or inappropriate?”

These are a few of the questions posed by Berkman Klein Executive Director Urs Gasser at the 40th International Conference of Data Protection and Privacy Commissioners (ICDPPC) during a panel on “Right Versus Wrong.”

The landmark event in Brussels, Belgium—which also marked the entering into force of the GDPR as the “new gold standard” of data protection law globally—featured a keynote address where Apple’s Tim Cook criticized the “weaponization” of personal data in scathing terms, and was a chance for government ministers responsible for privacy to assemble, debate, and share perspectives on matters pertinent to the data protection community.

Gasser moderated the interdisciplinary and international conversation, which spanned the creation of social norms at a fundamental level; the perspective of designers and developers, and how they ingrain certain values into their code; and the behavioral economics of how people use and interact with technology.

Effy Vayena, Professor of Bioethics at Health Ethics and Policy Lab, ETH Zurich and a faculty associate at BKC, shared key learnings from a bioethics perspective. She described the emergence of “informed consent” and independent ethics review for projects and the changes they imposed on the field. Vayena stressed that bioethics norms are in flux and subject to criticism and modification, much as ethical norms are reevaluated in the wake of new technologies.

In addition to Gasser and Vayena, other panelists included Timothy Caulfield, Professor, Canada Research Chair in Health Law and Policy; Pascale Fung, Professor at the Department of Electronic & Computer Engineering, Hong Kong University of Science and Technology; and Norman Sadeh, Professor in the School of Computer Science at Carnegie Mellon University.

Ethical concerns and discussions such as the “Right Versus Wrong” debate at ICDPPC align with ongoing work at the Berkman Klein Center; in 2017 BKC and the MIT Media Lab launched the Ethics and Governance of AI Initiative, which aims, in part, to foster interdisciplinary conversations about the ethics of AI. Gasser and Vayena also recently co-edited a book on Big Data, Health Law, and Bioethics with I. Glenn Cohen and Holly Fernandez Lynch of Harvard Law School. 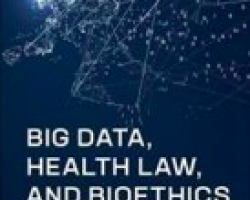 This timely, groundbreaking volume explores how law promotes or discourages the use of big data in the health care sphere.