The claim that election fraud is a major concern with mail-in ballots has become the central threat to election participation during the Covid-19 pandemic and to the legitimacy of the outcome of the election across the political spectrum.  President Trump has repeatedly cited his concerns over voter fraud associated with mail-in ballots as a reason that he may not abide by an adverse electoral outcome.  Polling conducted in September 2020 suggests that nearly half of Republicans agree with the president that election fraud is a major concern associated with expanded mail-in voting during the pandemic.  Few Democrats share that belief.  Despite the consensus among independent academic and journalistic investigations that voter fraud is rare and extremely unlikely to determine a national election, tens of millions of Americans believe the opposite.  This is a study of the disinformation campaign that led to widespread acceptance of this apparently false belief and to its partisan distribution pattern.  Contrary to the focus of most contemporary work on disinformation, our findings suggest that this highly effective disinformation campaign, with potentially profound effects for both participation in and the legitimacy of the 2020 election, was an elite-driven, mass-media led process. Social media played only a secondary and supportive role.

Our results are based on analyzing over fifty-five thousand online media stories, five million tweets, and seventy-five thousand posts on public Facebook pages garnering millions of engagements.  They are consistent with our findings about the American political media ecosystem from 2015-2018, published in Network Propaganda, in which we found that Fox News and Donald Trump’s own campaign were far more influential in spreading false beliefs than Russian trolls or Facebook clickbait artists. This dynamic appears to be even more pronounced in this election cycle, likely because Donald Trump’s position as president and his leadership of the Republican Party allow him to operate directly through political and media elites, rather than relying on online media as he did when he sought to advance his then-still-insurgent positions in 2015 and the first half of 2016. 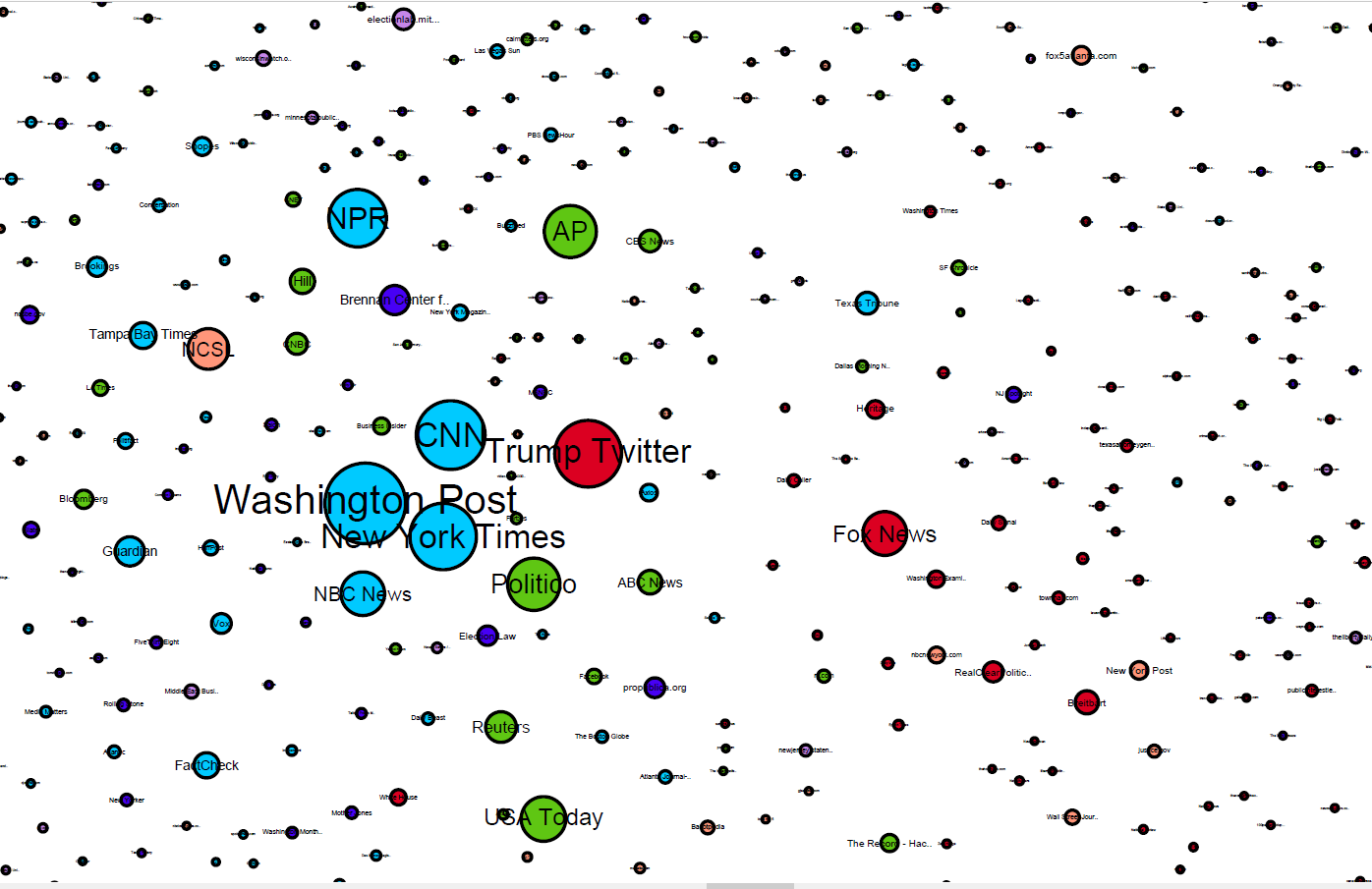 Network Map of online media outlets.  Nodes sized by inlinks from other media sources to stories they published about mail-in voter fraud, and reflect the influence of each media source on the overall debate.  Location on the map determined by the patterns of linking relations among all media sources.  “Trump Twitter” is composed of all Trump’s tweets about mail-in voter fraud that received links from any online story during the period observed.

Our findings here suggest that Donald Trump has perfected the art of harnessing mass media to disseminate and at times reinforce his disinformation campaign by using three core standard practices of professional journalism.  These three are: elite institutional focus (if the President says it, it’s news); headline seeking (if it bleeds, it leads); and balance, neutrality, or the avoidance of the appearance of taking a side.  He uses the first two in combination to summon coverage at will, and has used them continuously to set the agenda surrounding mail-in voting through a combination of tweets, press conferences, and television interviews on Fox News. He relies on the latter professional practice to keep audiences that are not politically pre-committed and have relatively low political knowledge confused, because it limits the degree to which professional journalists in mass media organizations are willing or able to directly call the voter fraud frame disinformation. The president is, however, not acting alone. Throughout the first six months of the disinformation campaign, the Republican National Committee (RNC) and staff from the Trump campaign appear repeatedly and consistently on message at the same moments, suggesting an institutionalized rather than individual disinformation campaign.  The efforts of the president and the Republican Party are supported by the right-wing media ecosystem, primarily Fox News and talk radio functioning in effect as a party press.  These reinforce the message, provide the president a platform, and marginalize or attack those Republican leaders or any conservative media personalities who insist that there is no evidence of widespread voter fraud associated with mail-in voting. 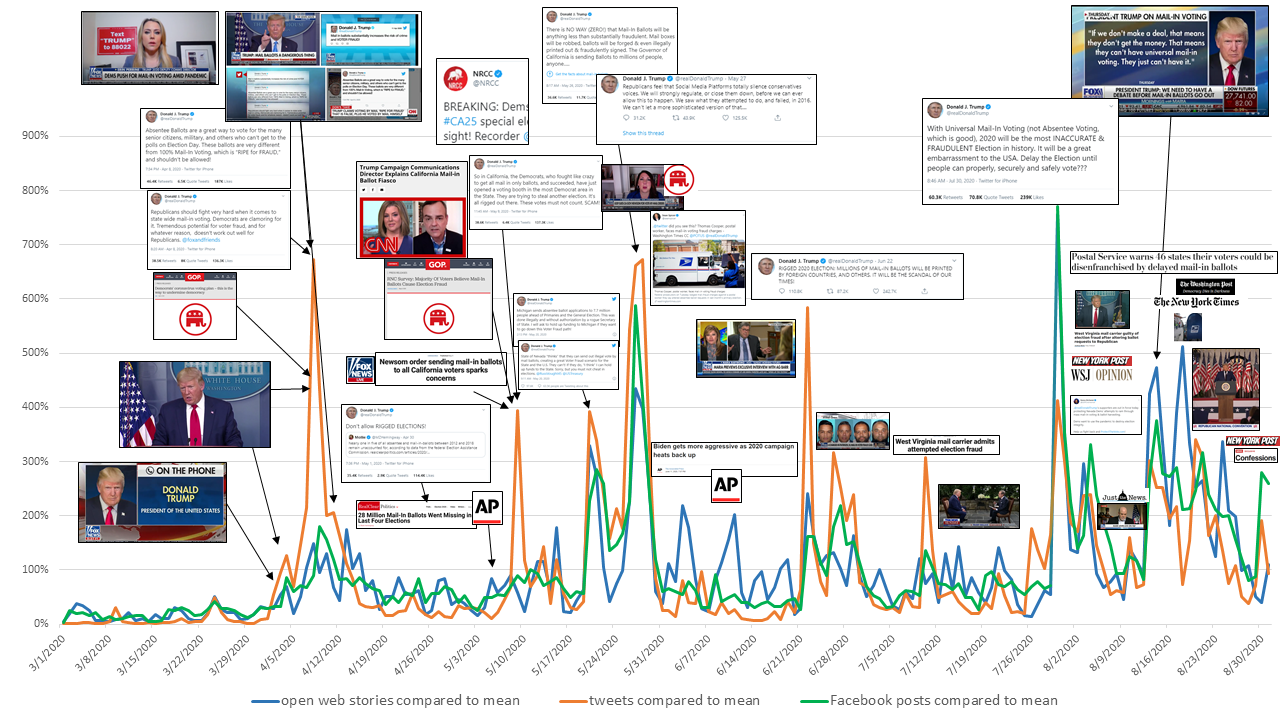 Changes in the number of stories published online, tweets, and Facebook posts that mention mail-in voting or absentee balloting and fraud or election rigging, March 1, 2020 to August 31, 2020. Icons represent the precipitating event for each peak. Trump, using Twitter, press briefings, and television interviews, coordinated with the RNC and his own reelection campaign, drives almost all peaks in attention.

The primary cure for the elite-driven, mass media communicated information disorder we observe here is unlikely to be more fact checking on Facebook.  Instead, it is likely to require more aggressive policing by traditional professional media, the Associated Press, the television networks, and local TV news editors of whether and how they cover Trump’s propaganda efforts, and how they educate their audiences about the disinformation campaign the president and the Republican Party have waged.

Public Discourse in the U.S. 2020 Election