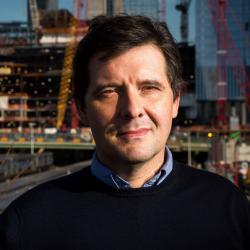 R. Trebor Scholz is a community-engaged scholar, author, and Founding Director of the Platform Cooperativism Consortium at The New School in New York City. His book Uber-Worked and Underpaid. How Workers Are Disrupting the Digital Economy (Polity, 2016) introduces the concept of "platform cooperativism" as a way of joining the co-op model with the digital economy. The global ecosystem counts 553 projects in 43 countries. Other volumes include Ours to Hack and to Own: Platform Cooperativism. A New Vision for the Future of Work and a Fairer Internet (listed by Wired Magazine as one of the Top Tech Books of 2017) and Digital Labor: The Internet as Playground and Factory (Routledge, 2013). As a professor in residence at Mondragon University and former fellow at Open Society Foundations, The India China Institute at TNS, and the USC Berggruen Institute, Scholz keynotes conferences and presents to a wide range of audiences worldwide. Dr. Scholz’ articles and ideas have appeared in The New York Times, The Nation, The Financial Times, Le Monde, and The Washington Post. He is also a Faculty Associate at the Berkman Klein Center for Internet and Society at Harvard University. To learn more, visit http://platform.coop