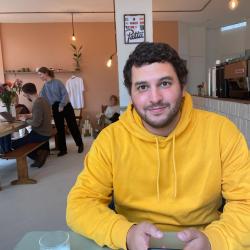 Tomás Dodds is an Assistant Professor in Journalism and New Media at Leiden University and a Faculty Associate at the Berkman Klein Center for Internet & Society at Harvard University. He is also a researcher in the AI, Media & Democracy Lab in the Netherlands and the Artificial Intelligence and Society Hub [IA+SIC] in Chile.

Tomás’ current research interests focus on artificial intelligence and automation in the media sector, immersive technologies, civic data science, and governance of technologies and the Internet.

As a journalist, Tomás has worked in the Press Office of the Inter-American Commission on Human Rights (IACHR) in Washington D.C. and the Regional Office of the United Nations High Commissioner for Human Rights in Santiago, Chile. He also worked as a correspondent for the EFE News Agency, the most prominent Spanish multimedia news agency. As a correspondent, he covered political and economic news, with some of his articles published or translated into Spanish, Portuguese, and English.