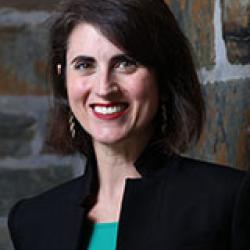 Sarah Sobieraj is Professor and Chair of the Department of Sociology at Tufts University. Her research focuses on US political culture, extreme incivility, digital abuse and harassment, and the mediated information environment. Her most recent book, Credible Threat: Attacks Against Women Online and the Future of Democracy (Oxford University Press, 2020), examines the impact of identity-based digital abuse on women’s participation in social and political discourse.

She is also the author of The Outrage Industry: Political Opinion Media and the New Incivility (Oxford University Press, 2014) with Jeff Berry, and Soundbitten: The Perils of Media-Centered Political Activism (NYU Press, 2011). Professor Sobieraj edited (with Rob Boatright, Danna Young, and Tim Schaffer) A Crisis of Civility?: Political Discourse and Its Discontents (Routledge, 2019). A new volume, the Oxford Handbook on Sociology and Digital Media, which she co-edited with Deana Rohlinger, will be out in 2022.

Sobieraj’s most recent journal articles can be found in Information, Communication & Society, Social Problems, PS: Political Science & Politics, Poetics, Political Communication, and Sociological Theory. Her work has been featured in venues such as the New York Times, the Washington Post, the Boston Globe, Politico, Vox, CNN, PBS, NPR, the American Prospect, National Review, the Atlantic, Pacific Standard, and Salon. Sobieraj serves on the advisory board of the Social Science Research Council’s Disinformation Research Mapping Initiative and is a member of the National Institute for Civil Discourse Research Network.

The High Cost of Online Attacks Against Women

Sarah Sobieraj on online attacks against women, what they mean for America, and what can be done about them.