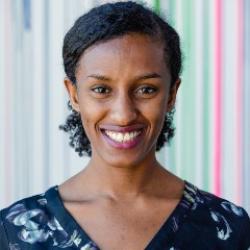 Rediet Abebe is a computer scientist with a strong interest in the promotion of equality and justice.

Her research is in the fields of algorithms and AI, with a focus on improving access to opportunity for historically marginalized and underserved communities. As part of this research agenda, she co-founded and co-organizes Mechanism Design for Social Good (MD4SG), a multi-institutional, interdisciplinary research initiative, as well as Black in AI, an organization focused on increasing the presence and inclusion of Black individuals in AI.

Abebe is currently a Junior Fellow at the Harvard Society of Fellows and a Ph.D. candidate in computer science at Cornell University. She holds an M.S. in computer science from Cornell, and M.A. in mathematics from the University of Cambridge, and an M.S. and B.A. in mathematics from Harvard. Abebe was recently named one of 35 Innovators Under 35 by the MIT Technology Review and honored in the 2019 Bloomberg 50 list as a "one to watch." Her work has been covered by outlets including Forbes, The Boston Globe, and The Washington Post. Her research is deeply influenced by her upbringing in her hometown of Addis Ababa, Ethiopia, where she lived until moving to the U.S. in 2009.

The Bloomberg 50: The People Who Defined Global Business in 2018

Rediet Abebe earns a place on the annual Bloomberg 50

Her research focuses on how algorithms can be applied to health, education, and housing.

Why AI Needs To Reflect Society

Greater diversity within research communities can control for bias in this process.