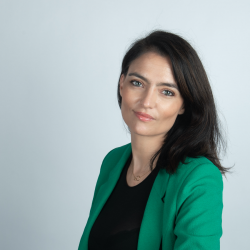 Elodie Vialle is a journalist working at the intersection of Journalism, Technology and Human Rights. In 2022/2023, Elodie will be a Fellow at the Institute for Rebooting Social Media at BKC, working on building an escalation channel for journalists facing an attack on social media.

Elodie is a Berkman Klein Center Affiliate, a Consultant on Digital Safety and Free Expression at PEN America, a Member of the Coalition Against Online Violence and a Member of the Journalism Safety Research Network.

As a press freedom defender focusing on online abuse of journalists, she has a unique holistic approach to the topic; producing research, resources for journalists and emergency protocols for newsrooms, training international journalists, engaging with social media platforms, academics, policy makers and wider audiences.

Elodie was previously a Knight-Wallace Fellow at the University of Michigan and the Head of the Technology Desk at Reporters without Borders in Paris, where she monitored emerging threats undermining journalism and developed projects to defend the freedom of online information.

As an international media consultant, she has supported newsrooms and journalists facing digital challenges worldwide for the last 12 years. Elodie began her career as a TV journalist. She was also the Editor-in-chief of an online media dedicated to social innovation and hosted a program on change-making initiatives at the national French radio France Inter.