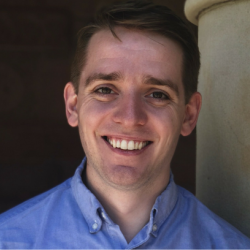 Colin Doyle is an Associate Professor of Law at Loyola Law School, Los Angeles. His research examines the relationship between criminal law, race, and emerging technology, particularly machine learning and artiﬁcial intelligence. Some of his work explores how overlooked features of new technology can challenge longstanding beliefs and practices within constitutional law, criminal law, and criminal procedure. Other research critiques traditional frameworks of authority in automated legal systems, exploring how machine learning could be used to study and surveil the powerful rather than the marginalized. Recognizing race as a technology designed to condone and camouﬂage injustice within the structure of American life, his work analyzes how this technology persists and transforms within automated legal systems. He has a particular focus on decisions at the periphery of criminal adjudication, including bail setting and fees and ﬁnes determinations.

His scholarship has appeared in the ACM Conference on Fairness, Accountability, and Transparency, the Journal of Criminal Law and Criminology, and the Duke Law Journal Online. His research has been cited in federal and state court decisions, including the California Supreme Court’s landmark decision, In re Humphrey, that found the state’s money bail practices to be unconstitutional. Doyle also writes about criminal law and technology for a broader public audience with his work appearing in The New York Times, The Appeal, and the New York Law Journal.

The Feature is the Bug

Colin Doyle explains how algorithms can expose flaws in criminal laws and the harms that they can produce.