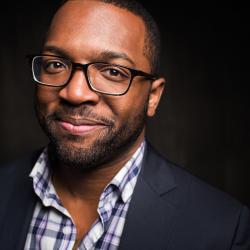 Baratunde Thurston is a technology-loving comedian from the future who cares enough about the world to engage with it politically. Yes, he votes. Regularly. With an ancestry that includes a great-grandfather who taught himself to read, a grandmother who was the first black employee at the U.S. Supreme Court building and a mother who took over radio stations in the name of the black liberation struggle, Baratunde has long been taught to question authority. It helps that he was raised in Washington, D.C. under crackhead Mayor Marion Barry.

His creative and inquisitive mind, forged by his mother’s lessons and polished by a philosophy degree from Harvard, have found expression in his monthly Fast Company column, on the sound waves of NPR, and on the screens of news networks such as CNN, MSNBC, BBC, Al Jazeera English and This Week In Tech. He even hosted his own show on Discovery Science called Popular Science's Future Of.

Far from simply appearing in media, Baratunde is also helping defining its future. In 2006 he co-founded Jack & Jill Politics, a black political blog whose coverage of the 2008 Democratic National Convention has been archived by the Library Of Congress. From 2007 to 2012, he helped bring one of America’s finest journalistic institutions into the future, serving as Director of Digital for The Onion. In 2011 he was a judge for the Knight News Challenge, a media innovation contest which funds experiments in the future of news. His book, How To Be Black, was published by Harper Collins in February 2012 and is a New York Times best-seller. In January 2012, he joined the MIT Media Lab as a director's fellow.

His most significant expression, however, is probably his own creative experimentation with new digital platforms. He was named Foursquare Mayor of the Year for holding a real-world rally to defend his virtual mayorship. Every year he live hate-tweets the Twilight movies to his 100,000+ Twitter followers, and in 2009, he embodied the swine flu with a Twitter account of that name. In the summer of 2012, he co-founded Cultivated Wit, a startup that exists at the intersection of comedy, creativity, and technology to make the world more fun.

His wide range of experience and activity has earned him an equally wide range of praise. The ACLU of Michigan honored him “for changing the political and social landscape one laugh at a time.” He was nominated for the Bill Hicks Award for Thought Provoking Comedy. The Root added him to its list of 100 most influential African Americans. Fast Company listed him as one of the 100 Most Creative People In Business. Then-candidate Barack Obama called him “someone I need to know,” and YouTube user “mooospot” referred to him as a “dumbass liberal crackhead welfare sucker.”

When he’s not staring at a glowing rectangle, Mr. Thurston, which he goes by near the end of his bio, travels the world, speaking and advising on the subjects of our digital future and storytelling, satire and democracy, and race and politics. He has spoken at countless universities, and organizations as well as delivered keynotes at South by Southwest, Personal Democracy Forum, the Guardian Changing Media Summit, and more. In May 2011, he spoke at the presidential palace in Tbilisi, Georgia (the country) on the role of satire in a healthy democracy, and he has advised The White House on digital strategy and public engagement.

Baratunde performs standup comedy regularly in New York City, resides in Brooklyn, lives on Twitter and has over 30 years experience being black. 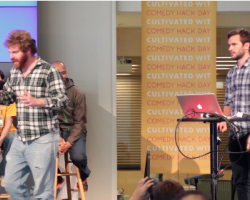 Radio Berkman 219: Whose App Is It Anyway?

What do you get when you put together a comedian, a developer, a few laptops and smartphones, and a bunch of energy drinks? The world's most absurd hack-a-thon!

Announcing the speaker lineup for TED2019: Bigger than us

Jonny Sun joins the TED2019 "Bigger than Us" speaker lineup