Internet Monitor is delighted to announce the publication of "Arab Religious Skeptics Online: Anonymity, Autonomy, and Discourse in a Hostile Environment," the sixth in a series of special reports that focus on key events and new developments in Internet freedom.

The report, authored by Helmi Noman, analyzes the content, discourse, and structure of three prominent Arab atheist web forums and examines the relationship between the networked information economy and the emergence of religious skeptics in Arab cyberspace:

The Arab atheist community is largely an online phenomenon, with limited visibility offline and with virtually no umbrella groups. It exists in unfriendly, if not hostile, political, social, religious, and legal environments. This paper aims to deepen our understanding of virtual space by analyzing the Arab atheist community online: its content, discourse, and structure. The research examines the relationship between the networked information economy and the emergence of religious skeptics as manifested in Arab cyberspace. A central question is whether the Internet enhances individual autonomy in matters of faith. Given that the Arab atheist community online is prevailingly anonymous, the paper assesses the potential and limitations of anonymous and pseudonymous speech online and the extent to which this facilitates or hinders sharing, debating, community building, and collective action.

The full paper is available for download at SSRN: Arab Religious Skeptics Online

Internet Monitor, based at the Berkman Center for Internet & Society, is a research project to evaluate, describe, and summarize the means, mechanisms, and extent of Internet content controls and Internet activity around the world. The project compiles and curates data from multiple sources, including primary data collected by the Berkman Center and our partners, as well as relevant secondary data. The Internet Monitor platform is a freely available online fact base that gives policy makers, digital activists, researchers, and user communities an authoritative, independent, and multi-faceted set of quantitative data on the state of the global Internet. Internet Monitor also provides expert analysis on the state of the global Internet via our special report series and our annual reports on notable events and trends in the digital space. 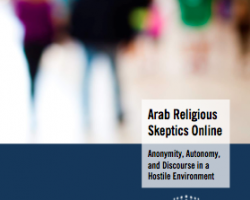 Anonymity, Autonomy, and Discourse in a Hostile Environment

"Arab Religious Skeptics Online: Anonymity, Autonomy, and Discourse in a Hostile Environment," authored by Helmi Noman, is the sixth paper in the Internet Monitor special report…