The Berkman Center for Internet & Society is pleased to announce the release of a new publication from the Media Cloud project, Social Mobilization and the Networked Public Sphere: Mapping the SOPA-PIPA Debate, authored by Yochai Benkler, Hal Roberts, Rob Faris, Alicia Solow-Niederman, and Bruce Etling.

In this paper, we use a new set of online research tools to develop a detailed study of the public debate over proposed legislation in the United States that was designed to give prosecutors and copyright holders new tools to pursue suspected online copyright violations. Our study applies a mixed-methods approach by combining text and link analysis with human coding and informal interviews to map the evolution of the controversy over time and to analyze the mobilization, roles, and interactions of various actors.

We also offer an interactive visualization that maps the evolution of the public controversy by collecting time slices of thousands of sources, then using link analysis to assess the progress of the debate over time. We used the Media Cloud platform to depict media sources (“nodes”, which appear as circles on the map with different colors denoting different media types). This visualization tracks media sources and their linkages within discrete time slices and allows users to zoom into the controversy to see which entities are present in the debate during a given period as well as who is linking to whom at any point in time.

The authors wish to thank the Ford Foundation and the Open Society Foundation for their generous support of this research and of the development of the Media Cloud platform.

Media Cloud, a joint project of the Berkman Center for Internet & Society at Harvard University and the Center for Civic Media at MIT, is an open source, open data platform that allows researchers to answer complex quantitative and qualitative questions about the content of online media. Using Media Cloud, academic researchers, journalism critics, and interested citizens can examine what media sources cover which stories, what language different media outlets use in conjunction with different stories, and how stories spread from one media outlet to another. We encourage interested readers to explore Media Cloud. 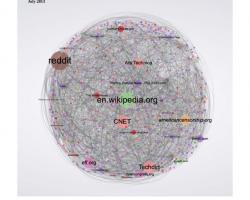