As the Boston Marathon bombings unfolded, thousands of anxious people in the region pulled out their mobile phones to connect with friends and family—and found that calls couldn’t be placed or received. Rumors that officials had shut down these mobile networks for security reasons weren’t true. The system was simply overloaded at a time when people needed it most.

Similar problems are likely to arise in the aftermath of other attacks or natural disasters such as earthquakes, when networks are overwhelmed by an instantaneous, acute need for large numbers of people to communicate at once. Our day-to-day communications networks aren’t always geared to scale up in emergencies. At these times, some citizens and companies need help, and others are eager to help—and all need to communicate. With some emerging technologies and a little advance coordination, we can harness our civic instinct to come together in times of crisis to keep data flowing.

We can start with an idea that needs no additional technology. Many people and companies operate Wi-Fi access points. Each of these points—whether used by apartment roommates, Starbucks patrons, or cell subscribers who get Wi-Fi “off-load” from their service providers—is connected to the Internet and often remains so even if cellular voice and data towers are out or overloaded. Continued... 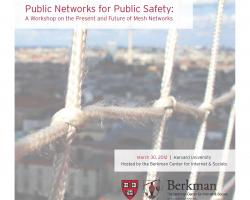 A Workshop on the Present and Future of Mesh Networks

The Berkman Center for Internet & Society is pleased to present this briefing document, which was developed as part of our March 30th workshop on "Public Networks for Public…