Berkman co-founder and faculty co-director Jonathan Zittrain's new book, The Future of the Internet--And How to Stop It, is in stock at Amazon, and Jonathan has been out speaking and writing about the book's central arguments.

Notably, in its March/April issue, Boston Review featured Jonathan's substantial essay, Protecting the Internet Without Wrecking It: How to meet the security threat, and pulled together an impressive group of respondents, including Bruce M. Owen, Richard Stallman, Susan Crawford , David D. Clark, Roger A. Grimes, and Hal Varian. Jonathan's counter-response has also been posted.

(For another absorbing back and forth on The Future of the Internet, see Adam Thierer's rigorous review at The Technology Liberation Front and Jonathan's blog post in response.)

Next on Jonathan's itinerary: as part of our year-long tenth anniversary celebration, Berkman@10, Berkman is hosting two book parties / talks. The first will take place in New York City.  The second, on April 18, brings Jonathan back to Cambridge, MA, to address the Berkman Center one month before the Berkman@10 conference -- "The Future of the Internet" -- and gala (registration is open for both the conference and the gala).

REMINDER: Nominations for the first Berkman Awards are being accepted until this Friday, April 11. The awards will be presented to people or institutions that have made a significant contribution to the Internet and its impact on society over the past decade. The primary awardee will receive $50,000, and five smaller awards will be given in specific categories such as: human rights/global advocacy; academic and intellectual leadership; pro bono work; infrastructure/communications tools; arts/culture/media; and news/information/journalism. There are no conditions placed on how the award money must be spent. Submit your nomination today! 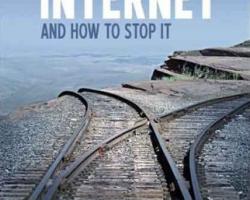 The Future of the Internet and How to Stop It