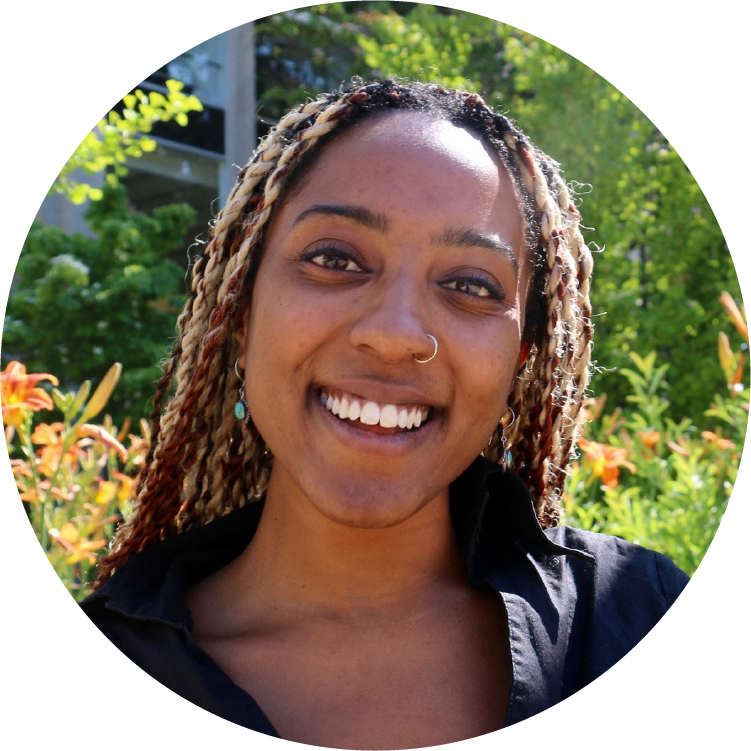 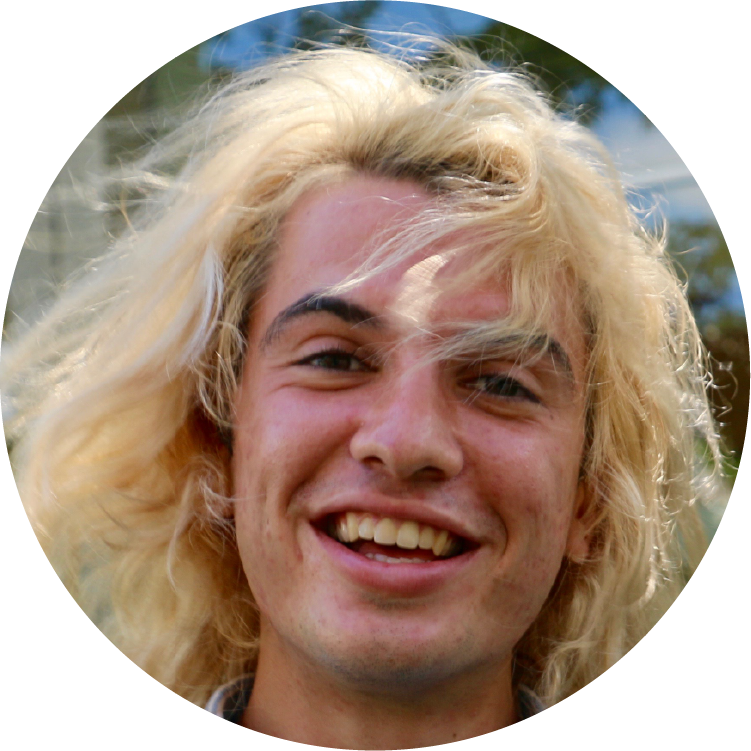 by Victoria Borneman and Julian DegrootLutzner

BKC Fellow Jim Lucchesse shared his vision for a more accountable and collaborative remix future with summer Berkterns Julian DegrootLutzner and Victoria Borneman. The Berkterns created this infographic as a visual representation of Jim's intersectional background, deep appreciation for music, and his recognition of the challenges the Internet and society face to tap into these potentials going forward. 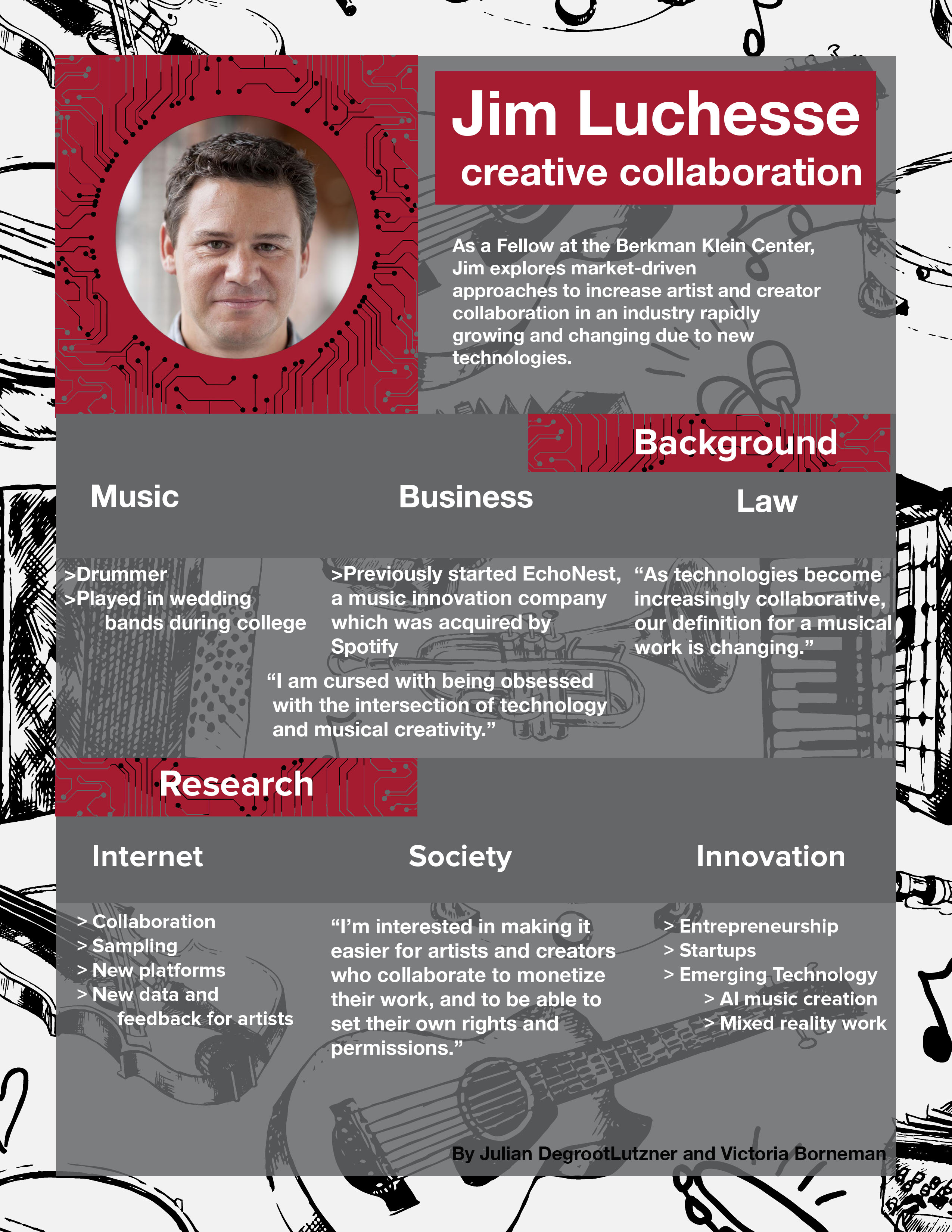 "There are number of technologies coming together in and around music that are enabling collaboration in new ways, and that are changing the definition of what we consider to be a musical work. Things are becoming increasingly multimedia and collaborative. But with each of the steps forward, come challenges on the legal side, challenges on the business model side. In some cases these challenges have been around for 30 years. In other cases we are seeing novel questions of law, policy, and business model."

You said you were going to look at a few new technologies. Could you name a few of the specific technologies?

Music samples have been around for 35 plus years. But there is still not a particularly efficient way to license samples into a creative work. The creation of music is becoming increasingly collaborative, in that the creators of small sound samples, loops, audio effects are all coming together with artists who are using multiple sources, borrowing from each other, collaborating. And it's happening more and more quickly. When you look at platforms like SoundCloud, we know that there's demand and fans of music — hundreds of millions of music fans and hundreds of thousands of creators. But there still isn't really a legal mechanism to enable artists to effectively license that.

But at the same time, we haven't unlocked the commercial potential of remix culture. My previous company Echonest was a music intelligence company. Half of the musical brain that we built performed audio analysis. So things like software that can analyze an audio file and understand musical attributes like pitch, tempo, time signature, whether a certain work was in it, was it live or in-studio, audio fingerprints, kind of like what Shazam does.

Over the last five years with deep learning technology we’re seeing new approaches to audio analysis for enabling a new level of content identification. We're seeing a lot of advances I previously thought would take a lot longer. It could be an opportunity to unlock the potential of remix and collaboration platforms. Looking at the potential technological approaches to make it easier for every contributor to a work to collaborate, to make sure they get paid, to be able to set their own rights and permissions within the work. All of those things are super interesting.

We're seeing a lot of advances I previously thought would take a lot longer. It could be an opportunity to unlock the potential of remix and collaboration platforms.

I'm also interested in how the creation and consumption of works in a much smaller package is evolving, and why that is. There's historically been a connection between the medium in which you're consuming the work and how long it is.

There's historically been a connection between the medium in which you're consuming the work and how long it is.

LP records, radio, long-form album-oriented music — there’s always been a connection between constraints and creativity. So I'm interested in the mobile-first world and how the interface is affecting creativity too. What comes out of that will likely be collaborative platforms that are able to identify and track rights make sure everyone gets paid, but give artist a less constrained workplace.

Are you still involved with Echonest?

Echonest was acquired by Spotify in 2014. So I spent the first year after the acquisition primarily focused on taking over music Discovery features within Spotify, so like Discover Weekly, your Daily Mix, Fresh Finds, all the personalization stuff. Analyzing you as music fan, understanding your different musical modalities, and then delivering a bunch of different personalized experiences that understand you to help you discover new music and to help you organize.

Analyzing you as music fan, understanding your different musical modalities, and then delivering a bunch of different personalized experiences that understand you to help you discover new music and to help you organize.

I worked to integrate teams for a year, and the teams went off and built other things and did a great job. And then started a team with Spotify Account Creator that was focused on building technology products directly, things like an analytics dashboard for artists — now it's called Spotify for artists. We did a lot of taking music recommendation work that we’d done in other areas to help an artist reach their most passionate fans, and worked with artists to run various tests like putting different offers in front of those fans. Like if I said that I’m a top fan of an artist, you'll get emails, presale tickets, secret shows sometimes. It went on to be a pretty sizable program within Spotify. So I worked on that for several years and then I left about a year ago.

Spotify is really invested in making itself a great platform for spoken word audio producers and creators. One of the big challenges for those creators is licensing. They want to license and that's why I say it makes sense that there are probably willing buyers and sellers on both sides of that. There are plenty of artists who would love to have their music included in a podcast. And the podcasters would love to share a reasonable portion of the money that they're making with those music creators. But there's so much friction because the way that those licenses work or the way that they've worked for totally different types of creative works. Licensing is really expensive, and just one example of where we need to allow for collaboration between rights holders, artists, and spoken word audio producers.

Why did you decide to come to the Berkman Klein Center and do your research here?

This is a really cool time. It’s the first time I think since I started working in music that the business hasn't been in decline. So people are making money for the first time in a long time. You're seeing growth, and you're seeing it on a global scale. And I think the fact that there's more money being generated in the space is also fueling even more innovation. That combined with the fact that some of the underlying technologies that are enabling a lot of these capabilities are moving really really fast. And that's going to create lots of opportunities for New Market entrants.

This is a really cool time. It’s the first time I think since I started working in music that the business hasn't been in decline. So people are making money for the first time in a long time. You're seeing growth, and you're seeing it on a global scale.

I am cursed with being obsessed with the intersection of technology and musical creativity. Ultimately, I'm going to start another company. The Berkman Klein Center has a long history in taking innovative, holistic, and integrative looks at how technologies are affecting creativity and the community. So the Center is a great place for me to go deeper in understanding, to take a breath, and take an analytical view as to what's happening in the marketplace. I home to learn perspectives from people who are a lot smarter than me and who come with completely different perspectives that I think will help me take my music industry blinders off a bit, and help me think about the space in ways that I hadn’t thought about before.

Where does your music background begin?

I played in a wedding band when I was in college. I actually enjoyed the challenge of playing weddings. I was never the guy who played like a hundred weddings a year. so for me being a wedding drummer was fun but I was careful not to do it so often that it became soul crushing.

Did you have a band at your wedding?

I had Melvin Sparks who is a really well known, recently deceased jazz guitar player. We brought him up from New York in his band. And then on drums we had Bernard Purdie. Bernard Purdie is one of the most recorded drummers of all time — most of the Motown stuff, Aretha Franklin, there rumors that there are certain Beatles songs that are Bernard. I don't know if that's true or not.

What's your favorite venue in Boston?

That's a really hard question! I really like the Lizard Lounge down the street, play there a billion times. I'm really really happy at the Cantab, and the promoters are doing a really good job hooking great music into there.

Julian DegrootLutzner is a senior at Pitzer College, part of the Claremont Colleges in Southern California. He enjoys navigating the intersections of his two study disciplines:  Sociology and Computer Science. During the summer of 2018, Julian worked with the Library Innovation Lab.