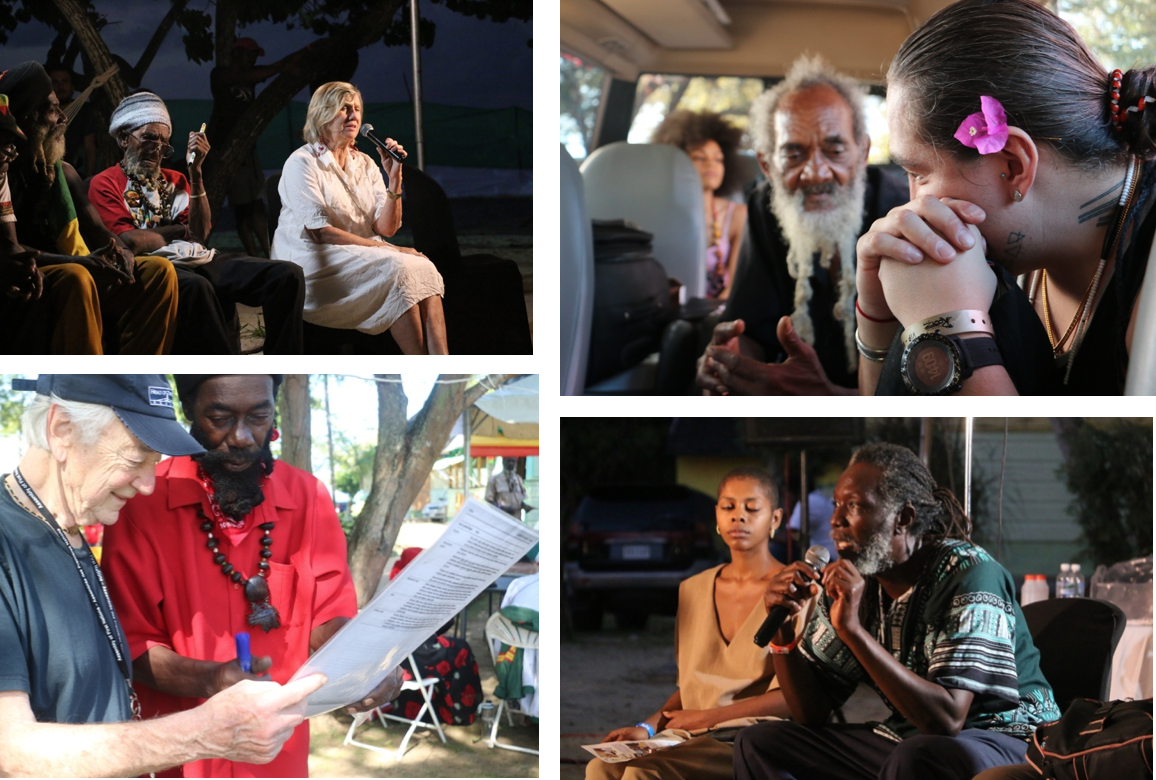 The Rasta Strategy for Climate Change in Negril, Jamaica convened indigenous and Rastafari community leaders to exchange traditional wisdom and current challenges facing their communities. An indigenous problem solving approach utilizes audacious, rhetorical strategy and a character stance amongst connected peoples. Our Workshop, "Re-Framing the Frame," aims to give structure to forward-looking steps for our allied groups. 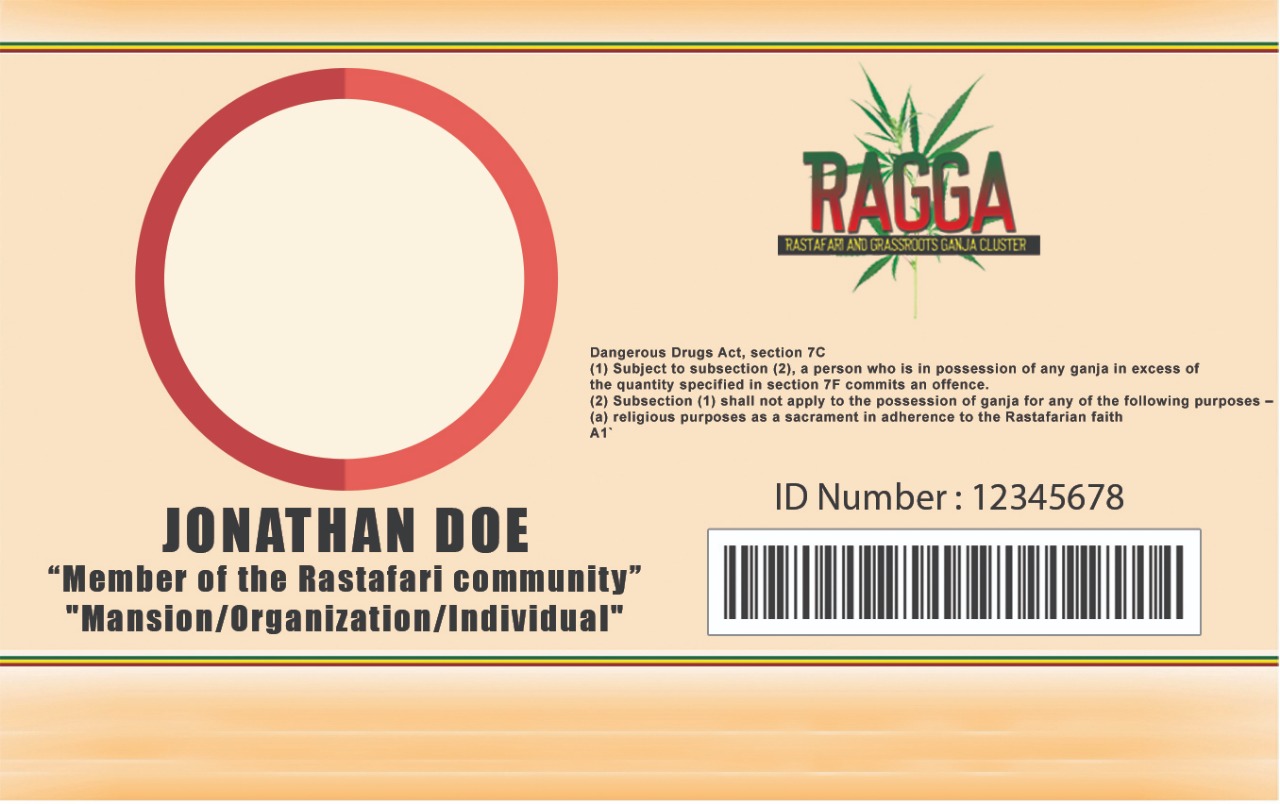 Dangerous Drug Act, Section 7C "(2) Subsection (1) shall not apply to the possession of ganja for any of the following purposes -- (a) religious purposes as a sacrament in adherence to the Rastafarian faith A1"

Bringing Leadership Together; Uniting Against a Common Enemy

“Rastafari RootzFest, part of the agenda is a concern for the rights of indigenous people.

Like Africans, their lands have been robbed, their resources exploited and their rights violated. So we always stretch out our hands in unity because our experiences are very very similar.

“Kathleen Mahoney is a professor from Calgary University, who just recently sponsored a conference in Canada, to which Ras- Iyah V attended. The reason she is here is to bring to this event the wisdom of Canada in the form of attention to how it’s indigenous people related to the Canadian government in a way that produced success.

And the purpose of Ras- IyahV going to Canada to participate in this [Banff] conference was to be able to come back here to address the question going forward of Rasta strategy in the face of resistance from government to asserting itself in a way that takes lesson from the Assembly of First Nations, so we put together a group to discuss it.”

The Discussion Circle and Thrown

"We give thanks for this circle. It’s very very important—especially toward the journey of Rastafari. And it’s important also because of the issues. Our friend who recognized that, In the indigenous world, it’s a circle thrown.. And that’s how I came into Rastafari. Our ritualistic spaces are all circle because we see ourselves as having conversations of kings, queens, prince and princesses. So this is really the familiar setting of any Rastafari space."

"The settlement agreement that Professor Nesson referred to—the legacy of that agreement, which was holistic and it was driven by Indigenous legal principles—was something called the Truth and Reconciliation Commission.

What was so important about that, and why I'm raising it, is when the Truth Commission finished its work, which took six years to hear people [share their personal experiences]. They wrote up 95 Calls To Action that addressed everything systemic in Canadian society that subordinates our indigenous people to less than full citizens.

So my University is becoming "indigenized." And that means we look at everything from admissions criteria for students, criteria for scholarships, and hiring policies. The overall ethic of the university curriculum changes the whole thing. And that's just one example of a systemic change that's starting to come about in Canada. Canadians as a whole, by and large, have bought into this process and it's changing the nature of the country."

“So there’s a question now about the ability of the Nation State of Canada to clamp down on these potentially sovereign territories. And that’s contested and it will be contested for a long time because it relates to something bigger than commerce.

It relates at one facet, to religion and our ability to commune with a non-human entity and enter treaty with a plant and say ‘take your contract law somewhere else—I have a contract with this sacred thing and we will work together in relation to bring life to our people and wealth, prosperity, and sustainability.

It’s never easy. It’s always going to be more complex than they tell you.

There’s another side though. And that’s the weird part. It’s that some of these nations have a lot of hell’s angels. Some of them have a lot of organized crime. There’s a possibility that very powerful criminal organizations can roll up and essentially overpower a relatively poor government, and then use that as a base of operations that’s tough to get into legally due to the unique status of First Nations in Canada. So It’s never easy. It’s always going to be more complex than they tell you.”

“Looking back through my ancestors, through my family and through myself, I wish we had understood when the predator first came, that if we don't seize control, they would seize control of us. And I think what I mean by that is that if you don't do it yourself, they will do it for you.

I wish we had understood when the predator first came, that if we don't seize control, they would seize control of us. And I think what I mean by that is that if you don't do it yourself, they will do it for you.

There are two, in my view, two reasons to avoid this [identification system.] One, that means "an other" can tell you, what you are. But worse, and I know this from our territory, any power you give them over you, they will not relinquish easily. It will be a struggle for generations, to get back what was always yours.

Following on that point, I wish my people had seen and understood the power that comes from defining something. That map of the law informed copyright and patent, and national or international legal structures, are maps. But there --they have power. It's like a weird king of magic. And unfortunately in the 21st century we too have to bring good spirit to that system. That's the challenge of modern law.

I wish my people had understood that in the way that they defined us they divided us, and I think that's because it was designed to divide. So I would encourage you and your people to think about a structure that is not designed to dived and break apart, but rather to bring together under One Love.

I wish my people had understood that in the way that they defined us they divided us, and I think that's because it was designed to divide. So I would encourage you and your people to think about a structure that is not designed to dived and break apart, but rather to bring together under One Love. And I don't I don't know how that works but I do know that that's a good principle as well. This- this is just related. This card describes rights. But it's this *points to heart* that describes responsibilities for me. Right? And the thing is, what if this card had to carry both?

You know, I have a right to hunt, fish, and trap. But my obligations written on my body, are the responsibilities to be a part of the sacred dance of life and death in my territory. There's no card given by the Canadian government to honor that responsibility.

I'll bet you there are responsibilities in your sacraments. I will bet there are obligations. I see there are no bones in this space. Those obligations, maybe you can't define them, but this card, that tells me what I am, in the eyes of the Canadian government as a status Indian has nothing to do with the obligations with the I carry as Echo Dene and Deneza. So maybe there is something there that you need to avoid. If it's card that only has rights, but no responsibilities, it becomes a tool for division."

“So this is what I would ask my brethren and sistren, that when we’re going out there now, whatever organization we are part of, whatever and or agenda is, to move with the power, to move with that spirit of love that we learn from our ancient matriarchs and patriarchs. That no matter what, that love for each other and even towards the ones that we’re facing, who might be our enemies, must never be absent.That is what we have used to break down a lot of barriers.

Through peace and love, heart of love, not in an empty way, but just as our brother said, through our Drums, through our ancestral traditions, through our chants, we have broken down barriers.

We must know when we speak, if we are really confident, that the conquering Lion of Judah will break every chain and give i&i a victory again and again. If we are confident in that victory brethren and sistren, let us arm ourselves morally and in every way possible to go through the works and to receive the victories.

Rastafari and the Sacred Herb

“It might be surprising, some people might ask, 'What does this panel and this discussion have to do with Rastafari RootzFest or Rastafari, i&i?' I assure that you all hear and see the similarities: the similar experiences that i&i as Rastafari as African people have with the Native American Indian, The First Nation. They have experiences very similar to us.

Even where their lands are concerned is very similar to the Ganja situation here with i&i as Rastafari. It’s i&i who has born the persecution. It’s i&i who was targeted by the state where herb is concerned. And now, the fact that it is being legalized, if we don’t know what we’re doing, it will be taken over by these very rich, criminal people who have been responsible for exploiting us and enslaving us, just like they’ve done to these people. So again, put your hands together for these people. One love, one heart.”

“But trust me brethren, just like what our brother said, if our identity of ourselves, whether it is a physical identification, comes with only an identity of a role without responsibility... His majesty speaks very very pointedly to responsibility. So for all of us, that's a very key role: our responsibility to what we are doing.”

The Spirit of the Drum, Rastafari Welcoming First Nations

"To take this discussion further and to build upon the good work that the professor does and that Professor Mahoney does, I think we need to get your people and your tribes hosting our people and our tribes to talk about what we've learned, what tactics worked, what tactics didn't, where is the opportunity, where is the economy, where is the possibility?And the final thing I'll say is I use the drum. It’s that I think the greatest challenge for all of us in a world dominated by technology is, 'How do we keep the spirit in this? That's always been the challenge. When you engage the colonizer they have no spirit, and you become eventually like them.

I think the greatest challenge for all of us in a world dominated by technology is, How do we keep the spirit in this? That's always been the challenge. When you engage the colonizer, they have no spirit, and you become eventually like them.

And that's hurt my people deeply. That's hurt my family deeply. It hurts me deeply. So I just ask as we reflect and I hope some day the tribes of Rastafari will invite my national chief and my chiefs here to take time together. But how do we keep the spirit? The drum? You know, those good things. How do keep that presence in this work? So something to end on.”