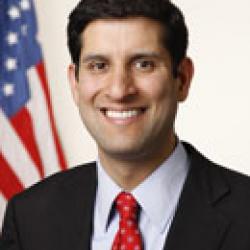 Vivek Kundra was appointed as the first United States Chief Information Officer by President Obama and is credited with saving over $3 billion in taxpayer dollars, adopting game-changing technologies in the public sector, strengthening the cybersecurity posture of the nation and launching an open government movement through the data.gov platform, which has been replicated across 21 nations, 29 states, 11 cities and several international organizations. Prior to joining the Obama administration, Kundra served in Mayor Fenty's cabinet as the CTO for the District of Columbia and Governor Kaine's cabinet as Assistant Secretary of Commerce and Technology for the Commonwealth of Virginia. He has also served in leadership roles in the private sector. The World Economic Forum selected Kundra as a 2011 Young Global Leader. He was named 2011 Government Executive of the year by TechAmerica; the 2009 Chief of the Year by InformationWeek; and 2008 IT Executive of the Year for his pioneering work to drive transparency, engage citizens and lower the cost of government operations. As a fellow at the Berkman Center and the Shorenstein Center on the Press, Politics, and Public Policy, Kundra's research will focus on the implications of digital media and technology on governance.