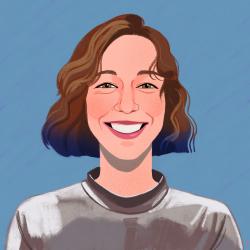 Sophie is a researcher, designer and writer working at the busy intersection of open source, visual and human rights-based investigations. She has a strong interest in the ethics of open source research and the co-creation of feminist frameworks.

Sophie is a founding member of the Feminist Open Source Investigations Group and is one half of the citizen sensing project, Open Weather. She currently works with Amnesty International’s Crisis Response Programme in the Evidence Lab. Sophie is also a collaborator of Syrian Archive.

Prior to Amnesty, Sophie was a Senior Researcher at the civilian casualty monitor, Airwars. Her advocacy work focused on the reconciliation of local reports of civilian harm in Iraq and Syria with belligerent reporting, via open source investigations, data modelling and liaison with the United States military. She has almost a decade of experience working as an independent researcher and designer with cultural and non-profit groups such as Forensic Architecture. Sophie sits on the Journal of Digital War editorial board.

Sophie studied Visual Communication at The Glasgow School of Art, before completing a Masters at the Centre for Research Architecture at Goldsmiths in London.

Offline and over the ether, she is M6NYX after the Greek goddess of the night.