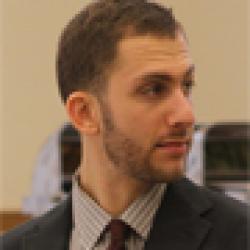 Nathaniel was privileged to be part of the Berkman team for four and a half years. As a Project Manager, he coordinated and contributed to the following efforts and activities, among others:

- CopyrightX, the networked course offered by HLS, HarvardX, and Berkman. Nathaniel managed the venture from 2012 to 2015, helping come up with the original course design and the first two major iterations. CopyrightX is a complex venture, involving curriculum development, teacher training, tech development, and collaboration with many partners- at Harvard and all over the world. Nathaniel kept watch on many pots cooking simultaneously.

- Youth and Media (YaM), which encompasses many research, advocacy, and development efforts. Nathaniel was involved with various YaM efforts throughout his Berkman tenure, primarily with the Born This Way Foundation partnership, the creation of curricular modules on information quality and social-emotional wellbeing, and most recently, the Youth-Oriented Online Hate Speech project.

- the partnership with the Born This Way Foundation (BTWF), Lady Gaga’s non-profit venture. During 2011 and 2012 Nathaniel co-authored Bullying in a Networked Era: A Literature Review and managed the Kinder & Braver World research series and various events that Berkman co-hosted, including an academic symposium and the BTWF launch event at Harvard.

- the 2013-2014 pilot of the Digital Problem-Solving Initiative, an experiment in residential education at Harvard.

- Youth-Oriented Online Hate Speech, which was interested in the intersections and differences among various forms of harmful/hurtful online speech, and—more importantly—in ways to counter them.

- Global Access in Action, which conducts action-oriented research into access to lifesaving medicines, and alternative incentives for the development of medical treatments for underserved populations.  During 2014 and 2015, Nathaniel managed workshops that brought together stakeholders from government, the pharmaceutical industry, civil society, donor organizations, and international government organizations.

The Born This Way Foundation has partnered with the John D. & Catherine T. MacArthur Foundation, The California Endowment and The Berkman Center at Harvard to explore the best…

The Kinder & Braver World Project: Research Series (danah boyd and John Palfrey, editors), is presented by the Born This Way Foundation & the Berkman Center for Internet and…

Leveraging its national and global networks, the Berkman Klein Center for Internet & Society at Harvard University is forming a first-of-its-kind thematic network of experts,… 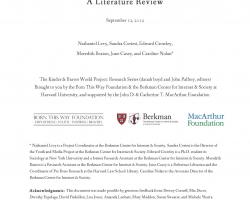 Bullying in a Networked Era: A Literature Review

This research update presents an aggregation and summary of recent academic literature on youth bullying. The purpose of this document is to “translate” scholarly research for a…