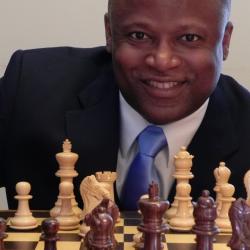 Maurice Ashley, an International Grandmaster of Chess, is a Fellow at Harvard's Berkman's Center working with Berkman's Mindsport Research Network to research and develop curricula centering on how games can be used to effectively impact subject learning online, in classrooms and in libraries around the world.

Through his company, Ashley-Parr LLC, Maurice has designed a chess curriculum, which is currently being used in a study funded by the Department of Education study to explore the effects of chess on executive functioning in 4th and 5th graders. His original puzzle, Pawn Mower, is a regular feature in the Richmond Times and Maurice's digital company, Mobile Match LLC, produced his app Learn Chess! with Maurice Ashley and co-designed another app, BC Take.

Maurice was named 2003 Grandmaster of the Year by the U.S. Chess Federation and has won many awards for his work bringing chess to underserved communities. He graduated with a B.A. in Creative Writing from the City College of New York.

More information about GM Ashley can be found by visiting his website at www.mauriceashley.com.

The Mindsport Research Network aims to build multiple experimental frameworks for understanding human strategic thinking in mind sports. Research will extend not only to…