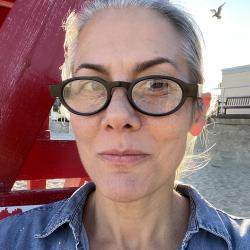 Lorca Shepperd is the Visual Communications Manager at the Berkman Klein Center for Internet and Society at Harvard University, and joined the communications team after her previous incarnation as a documentary television producer. For two decades, she worked as a supervising producer, story producer, cameraperson and field producer, making hundreds of hours of television on topics including food and travel, true crime, the arts, unconventional jobs, and emergency and maternal health care.

Highlights of her television career include several years as a supervising producer on the well-respected series Anthony Bourdain Parts Unknown, and even more years on the less-respected (but seriously fun to work on) early cable reality show Dog the Bounty Hunter. She's also got a Master's in Teaching from Brown University, and experience teaching varied high school and college populations. She holds a Master's in Cinema Studies from New York University and is a graduate of Oberlin College.