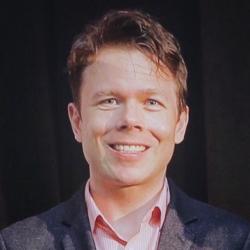 Jonathan Albright is the Director of Research at Columbia University's Tow Center for Digital Journalism.

Formerly an assistant professor of communications at Elon University, his work focuses on the analysis of socially-mediated news events, misinformation/propaganda, and media attention trends. He is a co-author of Pew Internet’s recent report, "The Future of Free Speech, Trolls, Anonymity and Fake News Online," and has undertaken an extensive investigation uncovering and mapping the emergent news ecosystem. Jonathan has presented his work at a number of leading international forums, including keynotes and panels at Johns Hopkins University, the International Journalism Festival, London School of Economics’ Polis, the Oxford Internet Institute, and Columbia’s own SIPA.

Albright’s work and mapping projects have been featured in The Guardian, The Washington Post, CBC’s Spark, and Fortune Magazine, and cited in The New Yorker, Associated Press Technology, BuzzFeed, Fox Business, Quartz, and the BBC. His network visualizations have been exhibited at the Queensland Art Museum. In addition to his award-nominated work for The Conversation, he has been a contributor to The Guardian, Medium, The Huffington Post, and LSE’s Impact and US Politics and Policy blogs. He is an alumnus of the Oxford Internet Institute Summer Doctoral Programme, a past participant at the University of Amsterdam’s Digital Methods Initiative, and has worked for Yahoo, Google, and McClatchy. He holds an MS from the University of Oregon’s SOJC and a PhD from The University of Auckland.