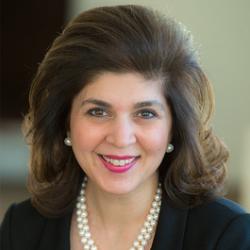 Farah Pandith is a world-leading expert and pioneer in countering violent extremism. She is a senior fellow at Harvard University’s Kennedy School of Government, an adjunct senior fellow at the Council on Foreign Relations, and she is Head of Strategy at the Institute for Strategic Dialogue. Her book is How We Win: How Cutting-Edge Entrepreneurs, Political Visionaries, Enlightened Business Leaders and Social Media Mavens Can Defeat the Extremist Threat. A foreign policy strategist and diplomatic entrepreneur, she is driving efforts to counter extremism through new organizations, programs and initiatives.

Ms. Pandith has served as a political appointee in the George H.W. Bush, George W. Bush, and Barack H. Obama administrations. Ms. Pandith was appointed the first-ever special representative to Muslim Communities in June 2009 by Secretary of State Hillary Rodham Clinton, serving under both Secretaries Clinton and John Kerry. The Office of the Special Representative was responsible for engaging with Muslims around the world both organizationally and individually. Reporting directly to the secretary of state, Ms. Pandith traveled to nearly one hundred countries and launched youth-focused initiatives, while also playing a central role in the creation of the Women in Public Service Project. In January 2013, she was awarded the Secretary's Distinguished Honor Award.

Prior to her appointment, Ms. Pandith was senior advisor to the assistant secretary of state for European and Eurasian Affairs at the U.S. Department of State. From December 2004 to February 2007, Ms. Pandith served as the director for Middle East Regional Initiatives for the National Security Council. Prior to joining the NSC, Ms. Pandith was chief of staff of the Bureau for Asia and the Near East for the U.S. Agency for International Development (USAID). In 2004, she spent two months in Afghanistan developing a public outreach strategy. She also served at USAID from 1990–1993 on the administrator’s staff and as the special assistant to the director of policy. From 1997 to 2003, Ms. Pandith was Vice President of International Business for ML Strategies, LLC in Boston, Massachusetts, and served as a Commissioner on Governor Paul A. Cellucci’s bi-partisan Asian Advisory Commission.

Ms. Pandith has consulted for organizations in the public, private, and non-profit sectors and has served in leadership positions on several boards with a focus on international affairs, women’s empowerment, education, and cultural diplomacy. These organizations include the Tribeca Film Institute, We Are Family Foundation, Risk Assistance Network + Exchange, Women in Public Service Project, and America Abroad Media. She was a member of Secretary Jeh Johnson’s Homeland Security Advisory Council where she chaired its task force on countering violent extremism (2015-2017). She also served as a Commissioner and Strategic Advisor on the Center for Strategic and International Studies CVE Commission, which produced the report Turning Point.

Ms. Pandith received a Master’s degree from The Fletcher School of Law and Diplomacy at Tufts University, where she specialized in International Security Studies, Islamic Civilizations and Southwest Asia, and International Negotiation and Conflict Resolution. She received an A.B. in Government and Psychology from Smith College, where she was president of the student body. She is currently a member of the Board of Overseers of The Fletcher School. Ms. Pandith was born in Srinagar, Kashmir, India, and was raised in the Commonwealth of Massachusetts. 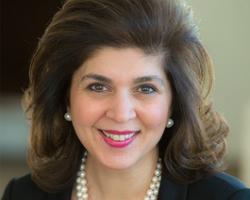 "How We Can Defeat the Extremist Threat"