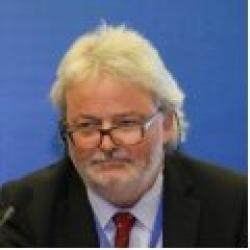 Dr. Daniel Stauffacher, a former Ambassador of Switzerland, is a founder and President of the ICT4Peace Foundation, which since 2003 explores, champions the use of Information and Communication Technologies (ICT) for peaceful purposes and supports diplomatic and multi-stakeholder processes for a peaceful and open cyberspace. He has a Master’s degree from Columbia University, New York and a Ph.D. in media and copyright law from the University of Zürich. After managing a Swiss publishing company, he joined the United Nations Development Program (UNDP) in 1982 and worked in New York, Laos and China. In 1990 he joined the Swiss Federal Office for Foreign Economic Affairs (Bawi) and in 1995 he was posted to the Swiss Mission to the European Union in Brussels. From 1999 to 2005 was the Special Representative and Ambassador of  the Swiss Federal Government for the hosting and preparation of the World Summit on Social Development plus 5 in 2000 in Geneva and the World Summit on the Information Society, which was held in Geneva in 2003 and in Tunis 2005. He was a member of UN SG Kofi Annan’s UN ICT Task Force and a Co-Chair of the UN Global Alliance for ICT for Development (GAID) and a Founder and President of the Geneva Security Forum. He is a founding Trustee of Sir Tim Berners Lee’s World Wide Web Foundation.

Since 2007 he served as an advisor to the Swiss, Swedish and other Governments and to the UN Secretariat General and a number of UN organisations on improving the UN Crisis Information Management Systems (CiMS) for humanitarian, peace-keeping and peace-building operations.He has also been an Advisor to several Governments, the UN, OSCE, OAS, AU, ASEAN on International Cyber Security Policy and Diplomacy  and related Capacity Building and has co-launched with the UN the Tech Against Terrorism Project. He is the President and Founder of the Zurich Hub for Ethics and Technology (ZHET). He has been invited to speak and moderate discussions at numerous global conferences and published  in these emerging fields. He is an Alumni of the  Harvard Law School’s Berkman Center on Internet and Society and the Geneva Center for Security Policy (GCSP).Dr. Daniel Stauffacher is President of Dr. Daniel Stauffacher + Partner, a consulting firm based in Switzerland that helps build partnerships for innovation among governments, international organisations, civil society and private-sector entities.