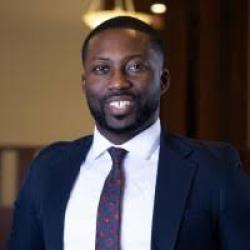 Daniel Oyolu is an affiliate at the Berkman Klein Center for Internet and Society. His interests range from tech entrepreneurship, digital rights, and development in Africa and Latin America to alternative dispute resolution models and dispute system design.

He is a corporate attorney at Cleary Gottlieb. He previously graduated from Harvard Law School where he was awarded the Kaufman Pro Bono Service Award for his pro bono work in the Boston area and around the world. While in law school, he was awarded a grant by the Orrick Fellows Program to study tech entrepreneurship in Cote d'Ivoire and Senegal. While in law school, he served on the executive board of the Harvard Africa Policy Journal, the Harvard African Law Association, and the Harvard Mediation Program.

Also, he previously worked as a Program Coordinator at the Berkman Klein Center and Lab Coordinator of the metaLAB at Harvard. Additionally, he served as a Campaign Fellow for Ayanna Pressley's historic congressional campaign in 2018. He studied Spanish at Bates College and wrote his thesis on the rhetoric of Fidel Castro regarding racial discrimination at the beginning of the Cuban Revolution.