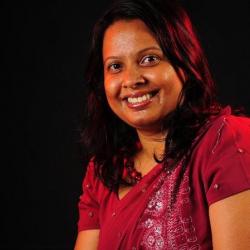 Dilrukshi Gamage is a postdoctoral research fellow at the Sasahara Lab, Department of Innovation Science, Tokyo Institute of Technology. Her research intersects within the fields of Computational Social Science and Human-Computer Interactions.

She works broadly on topics related to technology and societal implications. Primarily on AI-generated content such as deepfakes, misinformation, disinformation and analyzes behaviors of social processes in digital traces.

She also conducts ethnographic and computational research on digital communities such as Reddit, Twitter, Facebook Groups, and large-scale open learning communities such as MOOCs. Her research methods leverage NLP techniques, qualitative methods, designed experiments, or ethnographic fieldwork. She strongly believes in the importance of the application of ethics in new technologies and mitigating societal harm. Her research is supported by Japan Science and Technology Agency (JST-CREST).

Previously, Dilrukshi worked with the BKC as a research sprint participant under a project led by the Global Network of Internet & Society Centers (NoC) on the Ethics of Digitalization. The project broadly explored intellectual discussions intersecting science, politics, digital economy, and civil society, and at the end of the sprint, the cohort articulated a comprehensive policy recommendation as a collective.

During 2015-2018, She was part of a crowdsourcing research project led by Prof. Micheal Bernstein and Dr. Rajan Vaish at Stanford University and worked towards prototyping, designing, and experimenting with a scalable open govern platform for gig worker communities.

Dilrukshi holds a Bachelors's and Masters's Degree in Information Technology from the Sri Lanka Institute of Technology and a Ph.D. from the University of Moratuwa, Sri Lanka in 2021. Her research has been recognized on numerous occasions and presented as the best papers at Asian CHI Symposium at ACM CHI 2021 and IEEE Ubi-Media Conference. She was awarded prestigious scholarships such as Grace Hopper Women in Computer Science Conference (GHC 2020), Google Women Tech Maker Scholarship (WTM 2017), Young Researcher at Heidelberg Laureate Forum (HLF2017), ACM- Women's Scholarship (ACM-W 2014), IEEE WIE 2018 and offered various prestigious fellowships to interact with prominent researchers such as Oxford-Berlin Summer School, at Oxford University, Future Digi Leader at the Digitalize Stockholm 2020, Rising Stars at the EECS UC Berkeley 2020.

She volunteers her time to many academics and research by reviewing, editing, and organizing workshops and conferences at professional bodies such as IEEE and ACM SIGCHI.