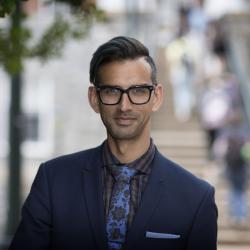 Dr. Christopher Ali is an Associate Professor in Department of Media Studies at the University of Virginia. He joined the Department in the fall of 2013 after completing his PhD at the Annenberg School for Communication at the University of Pennsylvania. His research interests include: communication policy and regulation, critical political economy, critical geography, comparative media systems, localism, and local news.

Christopher has published in numerous internationally ranked academic journals including: Communication Theory, Media Culture & Society and International Journal of Communication. His most recent article, which examines the role of the Rural Utilities Service in American rural broadband policy, was published in Telecommunications Policy in 2018. Christopher’s work on rural broadband has been published in The New York Times, and he is a frequent commentator on the subjects of broadband policy, media policy, and local news, with interviews in the Philadelphia Inquirer, Los Angeles Times, NPR, CNET, CBC, Bloomberg, and other major national and international news outlets.

Christopher’s first book, Media Localism: The Policies of Place (University of Illinois Press, 2017) addresses the difficulties of defining and regulating local media in the 21st century in the United States, United Kingdom, and Canada and the implications these difficulties have for the long-term viability of local news. This is the first book to investigate local media policy in a comparative context and the first to systematically assess media localism in Canada and the UK. It combines policy analysis and critical theory to provide for a unique perspective on one of the most challenging policy questions in the media industry: what does it mean to be local?

Currently, Christopher is the Faculty Fellow at the Benton Institute for Broadband & Society. He 2018 he was a Fellow with the Global Future Council of the World Economic Forum. In 2017, he was a Fellow at the Center for Advanced Research in Global Communications (CARGC) at the University of Pennsylvania. In 2016-2017, Christopher was a Fellow with the Tow Center for Digital Journalism at Columbia University, where he completed an intensive research project on the state of small market newspapers in the United States titled, “Local News in a Digital World: Small Market Newspapers in an era of Digital Disruption.” 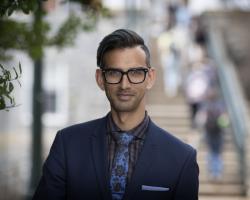 "Everything is better with better broadband" featuring Christopher Ali

VIDEO & PODCAST: The United States spends $6billion a year on rural broadband deployment, and yet the digital divide may be growing. Where is this money going?