As you age, you go to the doctor so that he or she can measure your progress: height, weight, blood pressure, and maybe, cholesterol. Through all these measurements, it's possible to gauge how your body is growing and changing in relation to your life and your environment.

At the Berkman Center, we’re collecting similar data on change and growth for a much larger body, the Internet, with a project called Internet Monitor.

Internet Monitor’s mission is to collect and share data about how people all over the world access and use the Internet. Right now, their online data platform presents and analyzes data from about 100 countries. Data comes in from a number of sources, including Berkman projects and partners, and can be used to figure out how accessible the Internet is in these places and what different online communities are talking about.

The team behind Internet Monitor mines for information and provides analysis and context so that it can be useful to decision makers, researchers, journalists and others who might just be interested in, for example, the secret, online world of Arab atheists, or the growing list of Internet regulations in Russia.

“The Internet is not its own separate thing anymore,” said Internet Monitor’s senior project manager Rebekah Heacock Jones. “It’s infiltrating all of these different pieces of our lives. We need accurate data about Internet access, online content controls, and online activity in order to better inform all kinds of decisions that affect the future of the Internet."

Since 2014, the Internet Monitor website has been a central location for hard data about Internet access and analysis about what different communities around the world are saying. The numbers come from places like the International Telecommunications Union, Akamai, and NetIndex, which collects speed and quality tests from Speedtest.net. In fact, there are a ton of sources, and they are all listed on Internet Monitor’s Data page. The goal of the project, according to Heacock Jones, is two-fold: providing better data for better decision making, and conducting original research that analyzes this data to see what it says about the status of the Internet.

This fall Internet Monitor plans to release a new platform for displaying all this data and more on one dashboard.

“The really exciting thing is that the dashboard format lets us pull in data that we don’t currently have a way to represent or to display,” she said. The new dashboard will allow people to see information like the most recent news topics in China, rather than just fixed statistics like the Internet penetration rate for China in 2012. 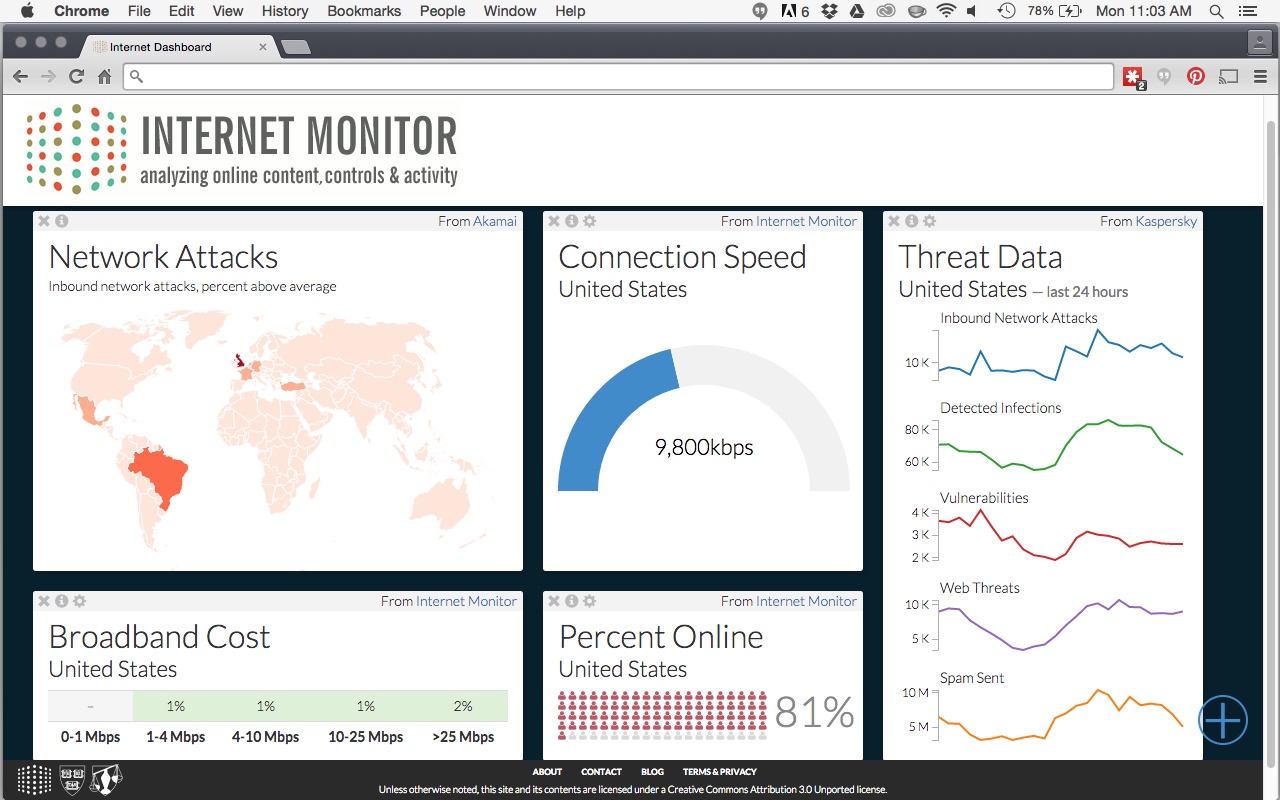 Heacock Jones said she hopes the dashboard format will draw in audiences who want to be able to engage more with the data. It can be useful to journalists as a monitoring and storytelling platform, and it’s customizable for someone interested in one specific location or topic. Users are not only able to arrange the data provided in a way that’s useful for them, they’re also invited to contribute data as well as widgets that can be useful for others.  As such, the new dashboard will open up new space for data sharing partnerships with a wide variety of companies and partner organizations.

“There's a lot of important data out there, but much of it is inaccessible to policymakers and the public—it's in corporate hands, or it's sprinkled around on lots of different websites. If you don't know where to go, it's really hard to find.” she said. “We're hoping that by putting this focus on data we can encourage people who do have good data to make it more publicly accessible. And then we can also make that data more easily available for policymakers and others who are making decisions.”

Twitter is one of the many sites blocked in China, so the report focuses on how users who have gotten around the firewall are choosing to interact with the site. Saudi Arabia, on the other hand, is the country with the highest percentage of active Twitter users in its online population.

“Our Chinese Twitter research looks at this community of people who have already hopped over the censorship wall,” said Heacock Jones. “It looks at what they’re talking about online and how they’re connecting to networks outside of China.”

Check out the video below to learn more about Internet Monitor.