For more information see the announcement via MIT Game Lab

As part of a team at Riot Games that includes statisticians, scientists, psychologists and developers, Jeffrey “Lyte” Lin and Carl “Status Kwoh” Kwoh are responsible for understanding and solving toxic player behavior.

The Player Behavior & Justice team at Riot use the latest research in behavioral, social and cognitive psychology to make major changes and minor tweaks to the League of Legends environment. From the player-driven Tribunal to the Honor Initiative, League of Legends’ behavior-focused features reduce harassment and reinforce positive actions.

Toxic player behavior is one of the biggest problems in online gaming today. In this interactive discussion, Lin and Kwoh, along with Justin Reich of the Berkman Center for Internet & Society, will discuss how psychological insights can create greater civility in a networked world. 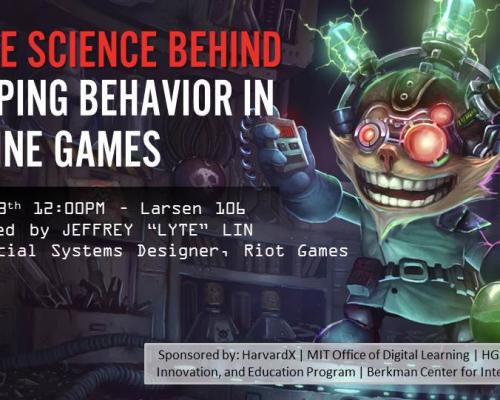 We’ll start by using social network analysis to map out how player behavior (both positive and negative) spreads in League of Legends, an online game with over 67 million players… More