From the OpenNet Initiative blog:

The OpenNet Initiative is proud to announce the release of its 2010 Year in Review, a collection of the year's top instances of filtering, surveillance, and information warfare around the globe.

Among the year's most well-known events are the banning of Blackberry services across Saudi Arabia, India, Bahrain, and other countries in the region as governments demanded increased access to data on RIM devices; the blocking of Facebook in multiple countries in response to "Everybody Draw Mohammed Day"; tensions between Google and China; and the filtering of Wikileaks in parts of the Middle East in response to the organization's release of United States diplomatic cables.

In Europe, new legislation in France allowed for filtering of blacklisted sites, while the United Kingdom passed the Digital Economy Bill, which increased the ease of suing repeat copyright violators.

The United States makes the review several times, for the seizure of over 80 sites on the basis of copyright infringement; outcry against the Combating Online Infringement and Counterfeits Act; and the loosening of export controls on instant messaging, email, and other Internet communication services to Iran, Sudan, and Cuba.

Recent unrest in the Middle East has lead Egypt, Libya, and Bahrain to experiment with greater Internet controls, ensuring that 2011 promises to be an equally eventful year in the world of Internet filtering and surveillance.

As always, feedback is welcome. Comments can be left on the OpenNet Initiative blog.

The Surveillance project is drawing a map of the different forms and impacts of surveillance online. Funded by the MacArthur Foundation and run in collaboration with our partner…

Book Description, from Amazon: Many countries around the world block or… 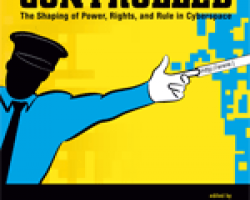 Access Controlled: The Shaping of Power, Rights, and Rule in Cyberspace

"Access Controlled: The Shaping of Power, Rights, and Rule in Cyberspace," edited by Ronald J. Deibert, John G. Palfrey, Rafal Rohozinski and Jonathan Zittrain, with a foreword by…