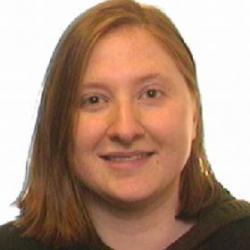 Archived Biography: As program coordinator at the Berkman Center, Wendy has built several websites, organized conferences, served as assistant to the Executive Director, fed the masses, and moved the entire department two buildings to the north, among other things. Her current favorite project is Harvard Weblogs.

Juggling many projects at once is nothing new to Wendy. She has worked in student services at two computer training schools. Wendy refined her technology and business development skills while with HighWired.com, an online global high school community. There, she helped adapt her product's content and features to better fit its audience and, in the process, wrote more than 100 articles on career and college preparation. For five years, she taught SAT, TOEFL and other test preparation courses for The Princeton Review.

Wendy graduated in 1996 with a bachelor’s degree in theatre studies from Wellesley College, where she helped save the major from being eliminated. At Wellesley, she was involved in dozens of productions and a couple of films, and attended the intense but incredible National Theatre Institute at the Eugene O'Neill Theater Center in Waterford, Connecticut. She has worked in professional theatre at the Cincinnati Playhouse in the Park, Maine State Music Theatre, and the Mac-Haydn Theatre in upstate New York.

Along being obsessed with The West Wing, Wendy is a fan of authors Nick Hornby, Marge Piercy and Jeanette Winterson. Her own writing can be seen on her weblog, and perhaps someday in a bookstore near you. She frequently spots the names of former classmates and co-workers in movie credits; among these are Nesbitt Blaisdell, Jordan Gelber, and Eyal Podell.