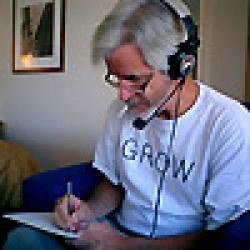 Archived Biography: Christopher Lydon stumbled out of the media storm into the pleasures of smart talk radio about a decade ago, and he intends to keep talking, and listening, forever. He was born hungry into a big family of Boston Irish strivers and he's stayed hungry: for literature (Russians, Victorians, Transcendentalists, Roth-Bellow-Updike); for the music of Brahms, Ellington and Chucho Valdes and his own piano time; for spiritual study in the Hebrew-Christian bible and Gospel singing at the Twelfth Baptist Church in Boston; for family life, and gardening and exotic travel.

In the background now are too many years in straight journalism, covering city and state politics for the Boston Globe and presidential campaigns (McGovern, Humphrey, Reagan, Carter et al.) for the New York Times, anchoring "The Ten O'Clock News" at WGBH-TV in Boston, and founding "The Connection" with Mary McGrath at WBUR.

Chris Lydon had run for mayor of Boston in 1993 -- a spur-of-the-moment stab at making a difference, or perhaps just surprising himself. In 1994, it turned out, the surprise that made the difference was radio. In the new millenium the onset of blogging, podcasting and the myriad extensions of the Internet expanded all Chris Lydon's horizons and the resonance of Emerson's essay "Circles," a Lydon standby: "Life is a series of surprises. We do not guess today the mood, the pleasure, the power of tomorrow, when we are building up our being.... Now for the first time seem I to know any thing rightly. The simplest words, -- we do not know what they mean except when we love and aspire."

We are engaged in three initiatives to explore new possibilities in Internet radio: Whole Wide World, the Berkman Radio Project, and the Public Radio Exchange.