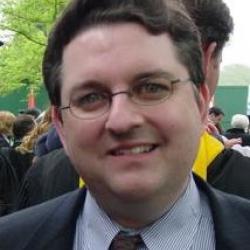 Tim Armstrong serves as Assistant Director of the ’s Clinical Program in Cyberlaw, which gives second- and third-year law students experience in litigation and client counseling in real-world high-technology disputes.  Tim’s research interests include the use of intellectual property law as a form of industrial regulation.

Tim earned his bachelor’s, master’s, and law degrees from The University of Texas at Austin.  After a one-year judicial clerkship with Senior Circuit Judge John Minor Wisdom of the U.S. Court of Appeals for the Fifth Circuit, he practiced for ten years with a large law firm in   During his career in practice, Tim specialized in Supreme Court and appellate litigation and was an active member of the firm’s pro bono committee.

In 1998, Tim represented the Office of the President of the in litigation arising from the Independent Counsel’s issuance of grand jury subpoenas to attorneys in the White House Counsel’s Office.  Tim’s other primary areas of experience in practice included administrative law, antitrust law and trade regulatory issues, labor arbitration, and government contract disputes.  He also represented indigent death row inmates in Virginia and Georgia in state and federal habeas corpus proceedings, and participated in several Supreme Court cases on behalf of organizations serving persons with disabilities.

Together with Berkman Center Research Fellow Derek Bambauer, Tim will be teaching course LSTU E-120, “Internet & Society: The Technologies and Politics of Control,” at the Harvard Extension School in the Spring 2006 semester.

Tim’s hobbies include travel and cooking.  He is a DIY computer enthusiast and enjoys assembling and upgrading a motley collection of computer hardware, on most of which he has installed Gentoo Linux.  Tim is also an accomplished amateur musician and songwriter who played bass guitar for eight years with The Frivolous Suits — very possibly ’s best all-lawyer rock, blues, and funk band.  Although Tim enjoys corresponding with a far-flung coterie of friends and acquaintances, he wishes to caution would-be correspondents and well-wishers that he is not the same person as the Tim Armstrong who plays guitar for the band Rancid.

Tim and his wife are expecting their first child in February 2006.  In the fall of 2006, Tim will join the faculty of the University of Cincinnati College of Law, where he will teach several intellectual property courses and first-year civil procedure.

Flow Chart of copyright duration and renewal process. Although intended for educational use, it is not a substitute for careful study of the actual statutory text or assigned… More

Digital Rights Management and the Process of Fair Use

Digital Rights Management and the Process of Fair Use