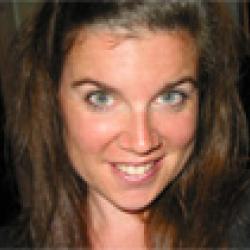 As a Senior Software Engineer at the Berkman Center, Juliet is currently responsible for realizing the vision of the H2O project in code. Since joining Berkman in November 2002, some of her contributions have been packaging H2O for public release, enhancing the Rotisserie discussion tool, and adding the Idea Exchange and full-text search to the H2O system. She collaborates with Jonathan Zittrain and Hal Roberts in moving H2O forward in innovative and exciting ways.

Juliet holds Bachelor's degrees in both Psychology and Computer Science. She became interested in computers while researching intensity resolution and subjective magnitude in psychophysical scaling at UBC. As an undergraduate in Computer Science at SFU, Juliet worked in the Algorithms Lab on an NSERC undergraduate research award, and with physicists at TRIUMF on the GEANT4 project. Since moving to Boston, she has worked as a consulant on a major government contract with the DTA, on a prototype for a volume rendering interface at MERL, and as Lead Systems engineer at Cendant Internet Engineering designing and implementing important backend services for Cendant sites such as netMarket, Century 21, and Privacy Guard. Before joining Berkman, Juliet was one of a core group of engineers at Firespout, an MIT startup, where she led a client-side development team, and contributed to the development of a text summarization engine.

Juliet spends most of her free time with her husband Bill and her cat Dexter. She is a media junkie, and is often plugged into her iPod, TiVo, or PS2.