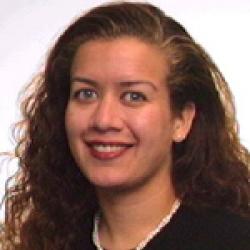 Archived Biography: As assistant director, Sylvie Agudelo oversees all administrative, financial, personnel, facilities, strategic planning and managerial aspects of the Berkman Center. Of the many programs Sylvie supports, she is primarily responsible for the Internet Law Program, which debuted in the summer of 2001 and was held again in Singapore in January 2002, and the Berkman Online Lecture and Discussion(BOLD) series. That program will begin again in winter 2002; past series topics include Privacy in Cyberspace and Violence Against Women.

In addition to her Berkman Center activities, Sylvie is a science, law and arts tutor at Adams House, expressing her enthusiasm for academic mentoring and the arts. She also maintains a Boston-area art studio; her interests include fore-edge painting.

Sylvie is currently an A.L.M. candidate in Molecular Biology at Harvard University Extension School; she expects to earn her degree in 2003. She received her bachelor’s degree from Boston University in environmental science, where she concentrated on marine and organismal biology. She maintains an interest in the sea spider, also known as a pycnogonid.

Before joining the Berkman Center, Sylvie was an executive assistant at Harvard's Center for Genomics Research. She has also worked in the software industry as a designer and manager of custom and Original Equipment Manufacturer (OEM) projects for companies such as MSNBC, Shell, Microsoft and Martha Stewart Living Omnimedia.