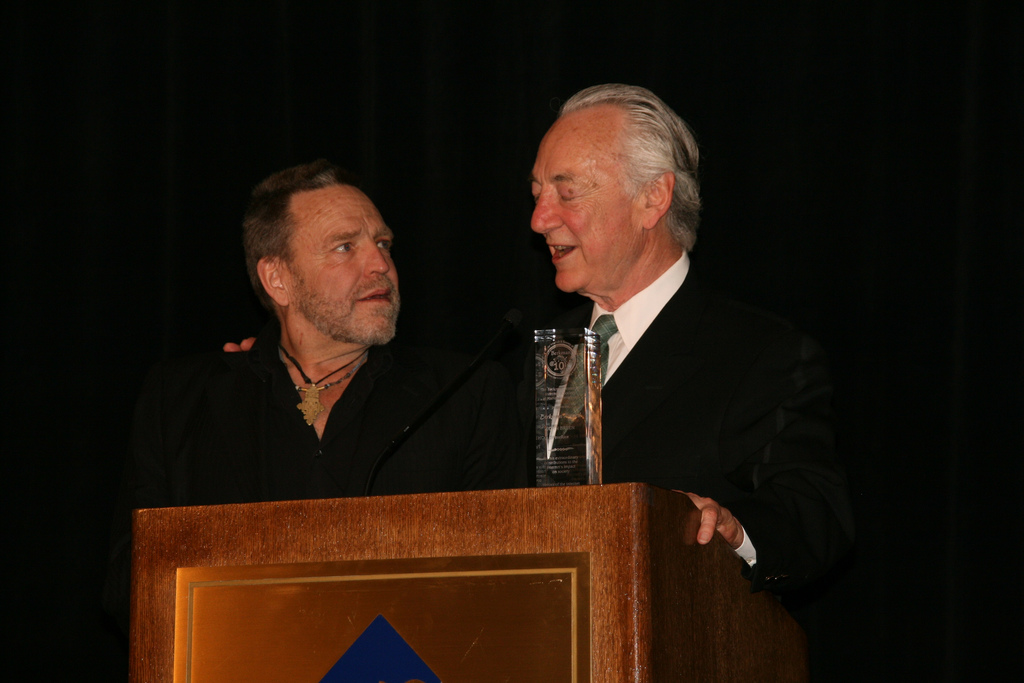 Internet pioneer John Perry Barlow passed away late last week at the age of 70. As the Berkman Klein Center's inaugural fellow in 1998, his ideas helped provide the foundation for the work of much of our community in the two decades since. Berkman Klein Center Founder and Director Charles Nesson sat down to share some thoughts on how Barlow helped build the values of the Internet.

How did you first encounter John?

I read a piece he wrote The Economy of Ideas (Wired, March 1, 1994) and just heard his voice. It was Barlow. The openness of it spoke a truth to me that I hadn't quite connected with this effectively. His sense of what a connected environment actually was and the implications for changing how we think. It led me to ask him to become the first fellow of the Berkman Center. I believe his spirit of connection is evident in all the work we've done: creative commons, open law, open radio, open economy, open health, free open libraries.

He is the net. He was the net. That openness of spirit that he expressed in his music, in his writing, and his connection with everyone radiated out through his friends like threads that make the net. He was extraordinary.

Where did some of these ideas come from about openness? And why did they ring so true to this community? How does his work seem so clarifying?

There was a clear feeling between the spirit of the 60s and of post World War ideas that somehow there is a “good America,” and that it has to do with community. The whole Vietnam experience was formative for Barlow and contemporaries, very much framed by the questions of justice and the place of America in the world, very much the environment in which Barlow emerges as a voice of connection. It's the idea that the Grateful Dead stand for. "Cool out, calm down, have a sense of enjoyment in your life and interaction, play fair, be fair." The better angels of our nature that make up the "liberal naïveté" of those who don't feel it. So it's kind of like a core value of collective spirit. It believes in community at some deep level, and equality, almost radical equality to the point where it's seen as deeply threatening to an environment that is based on and values secrecy.

It sounds like he was foundational in a lot of the ideas of how we think about information and the Internet now that maybe weren't taken for granted back then, that information and communication would be somewhat open and free. Would you describe his ideas as that foundation?

Yes I would. He brought threads together in a way that looked extremely clear-eyed. In The Economy of Ideas he was really talking about the music business. The question of what happens when there is no physical object to which you could attach a price tag. That was completely insightful and clarifying, and very much connected to how we began to understand the net.

What was it about the net that you think excited him and animated his spirit?

Recently Andrew McLaughlin circulated John's article about wiring Africa for Internet access (Africa Rising, Wired, January 1, 1998). Reading that, you're just blown away by the adventures and the joint venture that he exhibited, himself heading off on an expedition to see what connectivity in Africa was about and whether it could be a success. Brilliant reporting and just a stunning piece.

I think that he more than contemporaries saw the dimensional change that we were going through with Internet connectivity. The change from the pre-net world to what he could see as the cyber-world. He saw that as somehow deeper, more encompassing than others. And in doing that he offered a vision of a future that people could connect with.

Do you feel like we've reached what his vision of the Internet was and could be, or has it always been this kind of thing to strive for?

I can't imagine that he didn't have brighter visions than what appears to be evolving. That is, the incredible dominance of capital power on the net. I've thought that university might be a power for openness, and still have that belief. Seems to me that's where the power of openness naturally resides. So the idea of John at the core of thinking in an Internet dimension seems just right to me.

What's become clear though is that the power on the open side of the net has a rhetorical quality to it. It's a narrative force that is capable of gaining viral power, and opposing capital force. Learning to use that power is a challenge that John left.

This interview has been condensed and edited for clarity by Daniel Dennis Jones. Photos CC-licensed courtesy of D. Yvette Wohn and Doc Searls

If you have memories of John Perry Barlow you'd like to share, please send them to us at buzz@cyber.harvard.edu.